LOS ANGELES (AP) — A third gang member was sentenced to federal prison for the brazen armed robbery of a man’s $500,000 watch while he was dining outdoors in Beverly Hills, prosecutors said Monday. 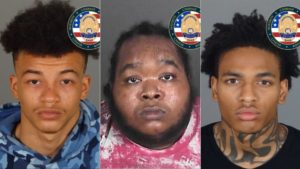 Two other defendants, 21-year-old Malik Lamont Powell and 18-year-old Khai McGhee, were each sentenced earlier this month to 12 years in prison.

The suspects wore hoods and one of them put a gun to the head of the watch’s owner as he sat at Il Pastaio restaurant last March, investigators said. A woman was shot in the leg during a struggle over the watch and the gun. She was not seriously hurt.

Surveillance video showed the suspects scouting the area around the restaurant before the robbery, according to a court statement by an FBI agent involved in the investigation.

The gun was left at the scene but the robbers fled with the watch, a rose-gold Richard Mille RM 11-03 Flyback Chronograph worth approximately $500,000.