LAS VEGAS (AP) — A man accused of killing a Las Vegas police officer fired 18 shots, and the man’s girlfriend’s mother was wounded during an exchange of gunfire between the man and police, a prosecutor said Friday. 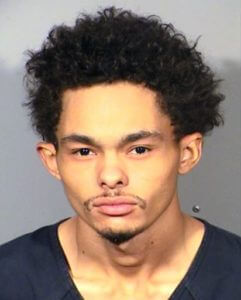 “The tragic part about this is (that) from the evidence, this defendant was being investigated for a misdemeanor,” District Attorney Steve Wolfson told reporters. “That’s why it’s a sad day. It didn’t have to happen. This officer didn’t have to lose his life.”

Hampton made an initial court appearance Friday before a hearing master who found probable cause to keep him jailed without bail pending arraignment Tuesday on eight felony charges including murder and attempted murder. He also faces a misdemeanor domestic battery count.

Hampton, of Las Vegas, was temporarily represented by a deputy public defender and did not speak in court. He is expected to have an attorney appointed to his defense on Tuesday. He is being held at the Clark County jail in Las Vegas.

Wolfson said Hampton’s girlfriend and her mother summoned police, and Thai and another officer responded at about 1 a.m. Thursday several blocks east of the Las Vegas Strip. 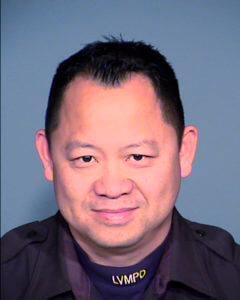 This undated photo provided by Las Vegas police shows Officer Truong Thai, 49. Clark County Sheriff Joe Lombardo told reporters that Thai was fatally wounded early Thursday, Oct. 13, 2022, in an exchange of gunfire with a man in a vehicle while answering a domestic violence call east of the Las Vegas Strip. Police say Tyson Hampton, 24, of Las Vegas was arrested as the suspect in the shooting. (Las Vegas Metropolitan Police Department via AP)

Clark County Sheriff Joe Lombardo said Thursday that both officers fired shots during the exchange, but Wolfson declined to say how many they fired or whether one of them fired a shot that wounded the woman.

The other officer has not been identified. He was placed on paid leave pending district attorney and departmental reviews of the shooting, the department said.

Thai, who was wearing a ballistic vest, was shot in the torso and died at a hospital, police said.

Wolfson declined to disclose the type of weapon Hampton is accused of using or say whether it was recovered by police. The Clark County coroner ruled Thai’s death a homicide.

The injured woman was not identified. Police said her wound was not life-threatening.

Records show that Hampton pleaded no contest in April 2021 in Las Vegas to a misdemeanor charge of displaying a weapon in a threatening manner during a domestic argument. A felony assault with a weapon charge was dismissed, and Hampton complied with court orders including probation and the surrender of a 9mm handgun.

Wolfson said Friday that witnesses in that case refused to cooperate.

Thai’s death came during a wave of violence involving police officers in and around Las Vegas and across the U.S.

Police in North Las Vegas on Thursday released body-worn video and 911 calls in the fatal shooting Monday by an officer shooting a man of a man who allegedly wore a Halloween mask and wielded a gun in a store and a park near five bystanders.

In 23 years as a Las Vegas police officer, Thai, 49, served as a patrol and training officer, financial crimes investigator and firearms instructor, the department said. The divorced father of a 19-year-old woman also was an avid volleyball player and coach.