WASHINGTON (AP) — Federal prosecutors on Monday finished presenting testimony against a Texas man who is the first person to be tried on charges related to the riot at the U.S. Capitol last year.

Guy Wesley Reffitt is not expected to testify at his trial on charges that he stormed the Capitol while armed with a holstered handgun and interfered with police. Before prosecutors rested their case, defense attorney William Welch said he doesn’t plan to call any defense witnesses. 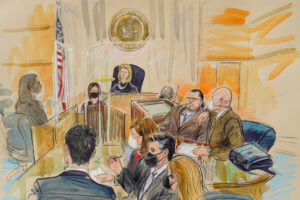 This artist sketch depicts Judge Dabney Friedrich looking out from the bench during jury selection for Guy Wesley Reffitt, joined by his lawyer William Welch, top right, in Federal Court, in Washington, Monday, Feb. 28, 2022. Seated from front left are members of the U.S. prosecution legal team, Tim Ryan, Risa Berkower, Jeff Nestler, and Amanda Rohde. Reffitt, a Texas man charged with storming the U.S. Capitol with a holstered handgun on his waist, is the first Jan. 6 defendant to go on trial. (Dana Verkouteren via AP)

Jurors will hear attorneys’ closing arguments before they begin deliberating.

Reffitt was arrested less than a week after the Jan. 6, 2021, riot at the Capitol. He also is charged with threatening his teenage children if they reported him to law enforcement after the attack.

Two Capitol police officers who tried to repel Reffitt outside the Capitol and an FBI agent who investigated the case were the last three government witnesses to testify.

Reffitt, 49, of Wylie, Texas, is a member of the “Texas Three Percenters” and bragged about his involvement in the riot to other members of the militia-style group, according to prosecutors. The Three Percenters militia movement refers to the myth that only 3% of American colonists fought against the British in the Revolutionary War.

On Friday, jurors heard testimony from a self-described Texas Three Percenters member who drove from Texas to Washington, D.C., with Reffitt. The witness, Rocky Hardie, said he and Reffitt both had holstered handguns strapped to their bodies when they attended then-President Donald Trump’s “Stop the Steal” rally just before the riot erupted.

On Thursday, Reffitt’s 19-year-old son, Jackson, testified that his father told him and his sister, then 16, that they would be traitors if they reported him to authorities and said “traitors get shot.” Jackson Reffitt’s younger sister, Peyton, was listed as a possible government witness but didn’t testify.

On Jan. 6, Reffitt had the holstered gun under his jacket, was carrying zip-tie handcuffs and was wearing body armor when he and other rioters advanced on police officers on the west side of the Capitol, according to prosecutors. Reffitt is not accused of entering the building. He retreated after an officer pepper-sprayed him in the face, prosecutors said.

More than 750 people have been charged with federal crimes related to the riot. Over 220 of them have pleaded guilty, mostly to misdemeanors. and over 110 of them have been sentenced. Approximately 90 others have trial dates.