Prosecutors were unable to prove the San Diego woman’s accusations beyond a reasonable doubt, the Los Angeles County district attorney’s office said in a document concluding their investigation.

Speaking publicly about the allegations for the first time Tuesday, Bauer vehemently denied in a seven-minute video posted on YouTube that he abused the woman.

He said the two engaged in rough sex at her suggestion and followed guidelines they agreed to in advance. Each encounter ended with them joking and her spending the night.

“The disturbing acts and conduct that she described simply did not occur,” he said.

The Associated Press does not typically identify people who say they have been victims of sexual assault, and the woman’s attorney did not immediately respond Tuesday to a request for comment. 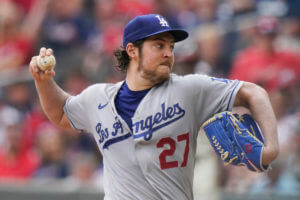 Bauer had previously said through representatives that everything that happened between the two was “wholly consensual” in the nights they spent together in April and May at his Pasadena home.

MLB and the Pasadena Police Department both investigated the accusations. Police turned over the results of their investigation to the Los Angeles County district attorney’s office in August.

Prosecutors looked into possible charges of felony assault, sodomy on an unconscious person and domestic abuse, according to the charge evaluation worksheet.
After reviewing physical evidence, witness statements and court proceedings when the woman sought a restraining order, prosecutors determined there was insufficient evidence to win a conviction.

The allegations against Bauer first surfaced publicly during the summer when the woman sought a protective order against the new Dodgers star. The woman said in court documents that she and Bauer met on Instagram when she tagged him in a photo while he pitched during a game against the San Diego Padres in April.

She later visited his home and sex began as consensual but grew violent without her consent, the documents said. The second incident — in which she alleges Bauer repeatedly punched her — left her with two black eyes, a bloodied swollen lip, significant bruising and scratching to one side of her face, according to the documents. She included photographs showing the injuries.

The then-27-year-old woman also testified extensively about the encounters during a four-day hearing but her request for a restraining order was denied by Judge Dianna Gould-Saltman of Los Angeles Superior Court. The judge found Bauer honored the woman’s boundaries when the woman set them, and could not have known about those he violated because she didn’t express them clearly.

“We consider in a sexual encounter that when a woman says no she should be believed,” Gould-Saltman said, “so what should we do when she says yes?”
Bauer didn’t testify at the civil hearing.

In the video titled “The Truth,” the pitcher — seated in a gym and wearing his Bauer Outage workout wear with ballcap turned backwards — said he was not perfect and had made some poor choices, but he was not the person portrayed by the woman, her lawyer or some media outlets.

“It’s alarming to watch how quickly, willingly, and knowingly certain members of the media have taken one side of a story and tried to convict me in the court of public opinion,” he said.

MLB and the union agreed to extend his administrative leave through the end of the postseason.

Regardless of the legal case outcome, Bauer could face a potential suspension by MLB of any length it chooses.

“MLB’s investigation is ongoing, and we will comment further at the appropriate time,” the league said in a statement Tuesday.

The Dodgers declined comment until the league’s probe concludes.

It’s possible Bauer could ask the players’ association to challenge any discipline in front of an arbitrator, arguing the penalty was without “just cause.”
___
AP Sports Writer Beth Harris contributed.