Charles Donohoe, 34, pleaded guilty during an appearance in federal court in Washington to charges of conspiracy to obstruct an official proceeding and assaulting or impeding federal officers. His plea agreement includes a provision to cooperate in the ongoing Justice Department cases against other Proud Boys members. 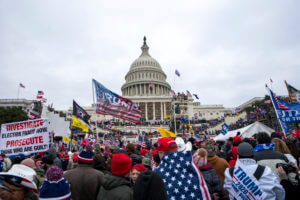 FILE – Rioters loyal to President Donald Trump rally at the U.S. Capitol in Washington on Jan. 6, 2021. A North Carolina man has become the second member of the Proud Boys to plead guilty to conspiring with other members of the extremist group to stop Congress from certifying the Electoral College vote. Charles Donohoe pleaded guilty Friday to charges of conspiracy and assaulting federal officers during an appearance in federal court in Washington. (AP Photo/Jose Luis Magana, File)

Federal sentencing guidelines call for a prison term of about six to seven years, although terms of his sentence will be up to a federal judge.

The indictment against Donohoe and other members of extremist groups, such as the Proud Boys and Oath Keepers, have been a focus of the Justice Department’s sprawling investigation of the Jan. 6, 2021 insurrection. Donohoe — who had been president of a local Proud Boys chapter in North Carolina — has close ties to the group’s leader, Enrique Tarrio.

More than three dozen people charged in the Capitol siege have been identified by federal authorities as Proud Boys leaders, members or associates.

Tarrio pleaded not guilty this week to charges that he remotely led a plot to stop Congress’ certification of Biden’s 2020 victory in the presidential election. Though he wasn’t at the Capitol during the Jan. 6 riot, prosecutors say Tarrio organized encrypted chats with Proud Boys members in the weeks before the attack, had a 42-second phone call with another member of the group in the building during the insurrection and took credit for the chaos at the Capitol.

A New York man, Matthew Greene, became the first Proud Boys member to plead guilty to conspiracy in December. He agreed to cooperate with authorities as part of a plea agreement.

On the morning of Jan. 6, Proud Boys members met at the Washington Monument and marched to the Capitol before President Donald Trump finished addressing thousands of supporters near the White House.

Around two hours later, just before Congress convened a joint session to certify the election results, a group of Proud Boys followed a crowd of people who breached barriers at a pedestrian entrance to the Capitol grounds, according to one of the indictments. Several Proud Boys also entered the Capitol itself after the mob smashed windows and forced open doors, the indictment says.

Since Jan. 6, 2021, more than 775 people have been arrested in nearly all 50 states for crimes related to the breach of the U.S. Capitol, officials said.