OSLO, Norway (AP) — A psychiatrist who has observed a Norwegian far-right extremist who killed 77 people in 2011 and is seeking an early release from prison said Wednesday that Anders Behring Breivik “has the same diagnosis that he has had all along.”

Breivik is serving Norway’s maximum 21-year sentence for setting off a bomb in Oslo’s government district and carrying out a shooting massacre at a summer camp for left-wing youth activists. Under Norwegian law, he was eligible for his first parole hearing after 10 years. 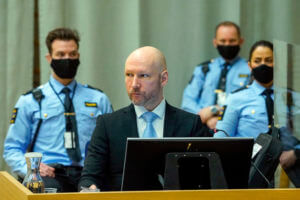 Norwegian mass killer Anders Behring Breivik sits in the makeshift courtroom in Skien prison on the second day of his hearing where he is requesting release on parole, in Skien, Norway, Wednesday, Jan. 19, 2022. Breivik, the far-right fanatic who killed 77 people in bomb-and-gun massacres in 2011, argued Tuesday for an early release from prison, telling a parole judge he had renounced violence even as he professed white supremacist views and flashed Nazi salutes. (Ole Berg-Rusten/NTB scanpix via AP)

The hearing started Tuesday at the high-security prison in Skien, south of Oslo. Psychiatrist Randi Rosenqvist said Wednesday that Breivik, 42, “has not changed (the) risk for future acts of violence compared to the way he was” when she first assessed him in 2012.

“He is not consistent, and you cannot trust him,” Rosenqvist said while appearing as a witness for the prosecution. Speaking of Breivik’s behavior since the massacre, she said that he “changes tactics according to what he finds appropriate.”

“He still has narcissistic traits. He still tends to construct scenarios. It is not psychotic, but he could in several contexts live out his fables in reality,” the psychiatrist said.

Though experts agree Breivik is highly unlikely to be released, authorities have insisted he has the same rights as any other prisoner, arguing that treating him differently would undermine the principles that underpin Norwegian society, including the rule of law and freedom of speech.

Breivik has made full use of his rights at the three-day hearing despite being held in isolation with three cells at his disposal. He said Tuesday that he had renounced violence even as he professed white supremacist views and flashed Nazi salutes.

“They give everyone a chance. Why cannot I also get a chance?” Breivik said Wednesday while questioning from his lawyer, Øystein Storrvik.

“I’ve been crushed into atoms for the last 10 years. I have changed so much that it is not possible to change anymore,” Breivik said.

Emily Krokann, a jurist with the Norwegian Correctional Service who works at the prison where Breivik is held, said Skien prison authorities believe “that there is an imminent danger that he will again commit serious crimes for which he has been convicted if he is released at the present time.”

“There is an imminent danger of violence or terror if released. The conditions are not enough to safeguard social protection,” Krokann said.