A man who identified himself as a believer in the QAnon conspiracy theory was sentenced on Wednesday to three years and eight months in prison for assaulting police officers at the Capitol during last year’s riot.

Nicholas Languerand called himself a patriot, but the judge who sentenced him said the rioters who invaded the Capitol on Jan. 6, 2021, don’t deserve that description. 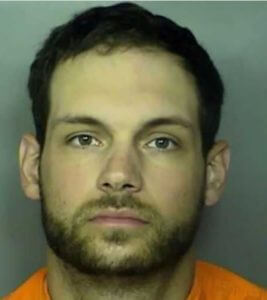 “The patriots were the police officers who were defending the Capitol building and our democratic values,” U.S. District Judge John Bates said before handing down one of the longest prison sentences for a Capitol rioter so far.

Languerand, 26, also told the judge that he was a QAnon follower. The conspiracy theory centers on the baseless belief that former President Donald Trump was waging a secret fight against a Satan-worshipping, child-sacrificing cabal of “deepstate” foes, prominent Democrats and Hollywood elites.

Another core belief of QAnon adherents is that Trump would orchestrate mass arrests, military tribunals and executions of his enemies. QAnon has been linked to a string of violent crimes. The FBI has warned law enforcement that conspiracy theory-driven extremists have become a domestic terrorism threat.

“It was never meant to be something violent,” said Languerand, who pleaded guilty to a felony assault charge in November.

Prosecutors had recommended a sentence of four years and three months in prison for Languerand, who moved from Vermont to South Carolina to live with his grandparents after the riot.

Languerand repeatedly assaulted police at the Capitol, throwing wood and an audio speaker at officers, and later bragged about his actions on social media, according to Assistant U.S. Attorney Robert Juman.

“The defendant was not caught up in the violence. He sought it out,” Juman said.

Federal authorities explicitly have linked more than 30 riot defendants to QAnon, according to an Associated Press review of court records. The true number of rioters influenced by the conspiracy theory is likely much higher, as QAnon has been embraced and promoted by influential Trump supporters. 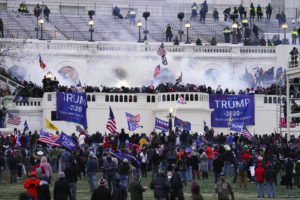 FILE – Violent protesters, loyal to President Donald Trump, storm the Capitol in Washington on Jan. 6, 2021. A man who identified himself as a believer in the QAnon conspiracy theory was sentenced on Wednesday, Jan. 26, 2022, to three years and eight months in prison for assaulting police officers at the Capitol during last year’s riot. Nicholas Languerand called himself a patriot, but the judge who sentenced him said the rioters who invaded the Capitol on Jan. 6, 2021, don’t deserve that description. (AP Photo/John Minchillo, File)

“Things did not go how I expected them to go,” Languerand said. “There were people that had told me that things were going to happen in a certain way, and then they didn’t happen. At that point, I began to realize that some of these people may have not been telling me the truth.”

After losing his job in the fall of 2020, Languerand was living in Vermont in a trailer with no vehicle or television. He began spending all of his time consuming information on the internet about QAnon and the Proud Boys, a far-right extremist group, according to his lawyer.

Languerand’s grandfather, Chares Killian, told the judge that his grandson’s difficult childhood and “alienation from society” led to his fascination with QAnon.

“I knew QAnon was pretty far out there, but I didn’t heartily try to dissuade him from listening to their arguments because he was getting involved in citizenry,” said his grandfather, Charles Killian.

Bates noted that Languerand continued to praise QAnon in a recent letter to the court and has partially blamed his violent conduct on being misled by others. The judge said that left him questioning the sincerity of Languerand’s remorse and whether he is a risk to reoffend.

More than 730 people have been charged with federal crimes related to the riot. Over 200 of them have pleaded guilty, mostly to misdemeanors with a maximum sentence of six months imprisonment.

Languerand is the fourth rioter to be sentenced for assaulting police. The other three defendants received prison sentences ranging from 41 months to 63 months.
Federal sentencing guidelines in Languerand’s case called for a sentence ranging from 46 to 57 months. The judge wasn’t bound by the guidelines.

Languerand has been jailed since his arrest last April in Little River, South Carolina, a coastal town near the North Carolina state line.

Defense attorney William Welch III asked the judge to sentence Languerand to one year and one day in prison with credit for the nine months he already has served in custody. Welch said Languerand didn’t plan on engaging in violence that day.

“He believed that he was part of something revolutionary,” the lawyer said.