NASHVILLE, Tenn. (WTVF) — Four of the six security guards charged in the August 2021 death of a man on the rooftop of a lower Broadway bar were not properly licensed with the State of Tennessee at the time of the incident, according to records requested and obtained by WTVF.

Last August, security cameras showed a group of men holding down 22-year old Dallas Jordan Barrett during an altercation with security staff at the Whiskey Row bar. He became unresponsive, and later died. 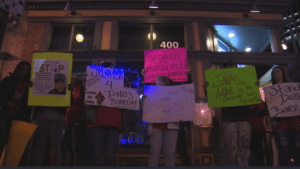 Four of the six security guards charged in the August 2021 death of a man on the rooftop of a lower Broadway bar were not properly licensed with the State of Tennessee at the time of the incident, according to records requested and obtained by WTVF. (WTVF)

But records from the Tennessee Department of Commerce and Insurance show on the night of Barrett’s death, Gray, Eustace, Maxwell and Watkins did not have the proper state licenses to work as security guards.

Of the two who were properly licensed, records show on Wednesday Larocca agreed to a suspension of his license until the conclusion of the criminal case. The department says Meneese faces a suspension hearing for his license on January 19.

The department says after the Whiskey row incident, the four unlicensed security guards all applied for licenses from the state. While the department says it initially granted one to Gray before it knew about his alleged involvement in the death, it suspended Gray’s license on Wednesday and did not grant licenses to the others.

Records show on Thursday the department also curtailed Whiskey Row’s ability to hire its own security guards; it must now hire a different, outside company to provide security.

In a statement to WTVF, attorneys for Tammy Barrett, the mother of Dallas Barrett, said in part: “It is difficult to fathom that Dierks Bentley and Dierks Bentley’s Whiskey Row Nashville cared so little for the safety of their patrons that four of the six security guards who murdered Tammy Barrett’s son were not even properly licensed.”

“While the decisive actions taken by the Department of Commerce and Insurance certainly will do nothing to alleviate the suffering, pain, and grief experienced by Ms. Tammy Barrett following the murder of her son, it is our sincere hope that the Department’s action will make Dierks Bentley’s Whiskey Row Nashville a safer environment for all patrons in the future,” the statement also said.

A spokesperson for Whiskey Row gave this comment to WTVF:

“The safety and security of our guests and employees is our top priority. Due to privacy issues, we will not address individual personnel matters and we will not comment at this time on ongoing administrative proceedings.”

In agreeing to a temporary suspension of Dylan Larocca’s guard license, G. Jeff Cherry, an attorney for Larocca, said Larocca does not intend on providing any security services while the criminal case against him is ongoing, saying “Mr. Larocca eagerly awaits the delivery of the discovery claimed to support the allegation lodged against him and will not comment further at this time.”

This story was originally published Jan. 8, 2022, by WTVF in Nashville, an E.W. Scripps Company.