ST. PETERSBURG, Fla. (AP) — The ground-floor pool deck of the oceanfront condominium building that collapsed near Miami was resting on a concrete slab that had “major structural damage” and needed to be extensively repaired, according to a 2018 engineering report that also uncovered “abundant cracking and spalling” of concrete columns, beams and walls in the parking garage. 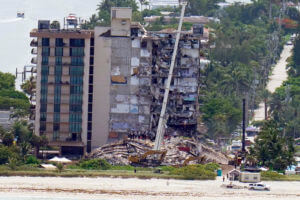 The report was among a series of documents released by the city of Surfside as rescuers continued to dig Saturday through rubble in an effort to find any of the 156 people who remain unaccounted for after the collapse. At least five people were killed.

While the engineering report from the firm of Morabito Consultants did not warn of imminent danger from the damage — and it is unclear if any of the damage observed was responsible for the collapse — it did note the need for extensive and costly repairs to fix the systemic issues with Champlain Towers South.

The report said the waterproofing under the pool deck had failed and had been improperly laid flat instead of sloped, preventing water from draining off.

The firm recommended that the damaged slabs be replaced in what would be a major repair.

Some of the damage to the concrete in the parking garage was minor, while other columns had exposed and deteriorating rebar. It also noted that many of the building’s previous attempts to fix the columns and other damage with epoxy were marred by poor workmanship and were failing.

Beneath the pool deck “where the slab had been epoxy-injected, new cracks were radiating from the originally repaired cracks,” the report said.

These were all problems that should have been dealt with quickly, said Gregg Schlesinger, an attorney specializing in construction defects and a former construction project engineer.

“The building speaks to us. It is telling us we have a serious problem,” Schlesinger said in a telephone interview Saturday about the new documents. “They (building managers) kicked the can down the road. The maintenance was improper. These were all red flags that needed to be addressed. They weren’t.”

In a statement Saturday, Morabito Consultants confirmed its report “detailed significant cracks and breaks in the concrete, which required repairs to ensure the safety of the residents and the public.”

The firm said it was hired again in June 2020 by Champlain Towers South to begin the 40-year recertification process that would detail what work needed to be done.

“At the time of the building collapse, roof repairs were under way, but concrete restoration had not yet begun,” the statement said.

Abi Aghayere, a Drexel University engineering researcher, said the extent of the damage shown in the engineering report was notable. In addition to possible problems under the pool, he said several areas above the entrance drive showing signs of deterioration were worrisome and should have been repaired immediately.

“Were the supporting members deteriorated to the extent that a critical structural element or their connections failed leading to progressive collapse?” he wrote in an email to the AP after reviewing the report. “Were there other areas in the structure that were badly deteriorated and unnoticed?”

The building was in the midst of its 40-year recertification process, which requires detailed structural and electrical inspections. In an interview Friday, Surfside Mayor Charles Burkett said he wasn’t sure if the inspection had been completed, but he said it may contain vital clues.

“It should have been a very straightforward thing,” Burkett said. “Buildings in America do not just fall down like this. There is a reason. We need to find out what that reason is.”

The 12-story tower’s collapse Thursday morning has also raised questions over whether other similar buildings are in danger. 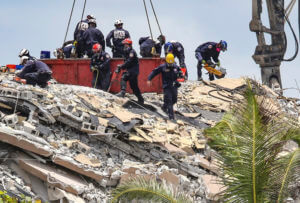 “This is a wake-up call for folks on the beach,” Schlesinger said. “The scary portion is the other buildings. You think this is unique? No.”

Details of the building’s 40-year recertification inspection will be made public once they are completed, Surfside Town Clerk Sandra McCready said in an email.

Miami-Dade Mayor Daniella Levine Cava said at a news conference Friday that she has seen no evidence of a sinkhole — much more common in other parts of Florida — or of something criminal, such as a bomb.

“I can tell you that at this time, they haven’t found any evidence of foul play,” she said.

Beyond that, much focus is on ocean water, which is rising in South Florida and elsewhere because of climate change. Last year, Republican Gov. Ron DeSantis signed into law a measure that would require developers to complete sea-level rise studies before beginning publicly funded projects.

One theory is that the saltwater ubiquitous in the area, which is subject to flooding during so-called King Tide events, intruded into concrete supports, corroding the steel-reinforcing rebar inside and weakening the concrete.

Meanwhile, the land on which Champlain Towers sat has been gradually sinking, according to a study published last year by an environmental professor at Florida International University.

But the professor, Shimon Wdowinski, cautioned against blaming the collapse on the caving ground.

“In most cases, these buildings just move,” he said in a video interview released by the university. “There’s no catastrophic collapse like in the case in Surfside, which was very unfortunate.”

Surfside officials say roof work was ongoing at the now-collapsed tower but have downplayed the possibility that work was a cause. Barry Cohen, a lawyer who escaped the crippled building with his wife, said the roof work could be part of a “perfect storm” of causes that combined to bring down the structure.

Another issue is whether nearby construction might have caused vibrations that weakened Champlain Towers. Cohen said he raised concerns previously that the work was possibly causing cracked pavers on the pool deck.

The collapse is already drawing lawsuits, including one filed hours after the collapse by attorney Brad Sohn against the condo’s homeowners association seeking damages for negligence and other reasons for all of the tower’s residents.

The association, the lawsuit contends, “could have prevented the collapse of Champlain Towers South through the exercise of ordinary care, safety measures and oversight.”

An attorney for the association, Ken Direktor, did not respond Friday to an email requesting comment. 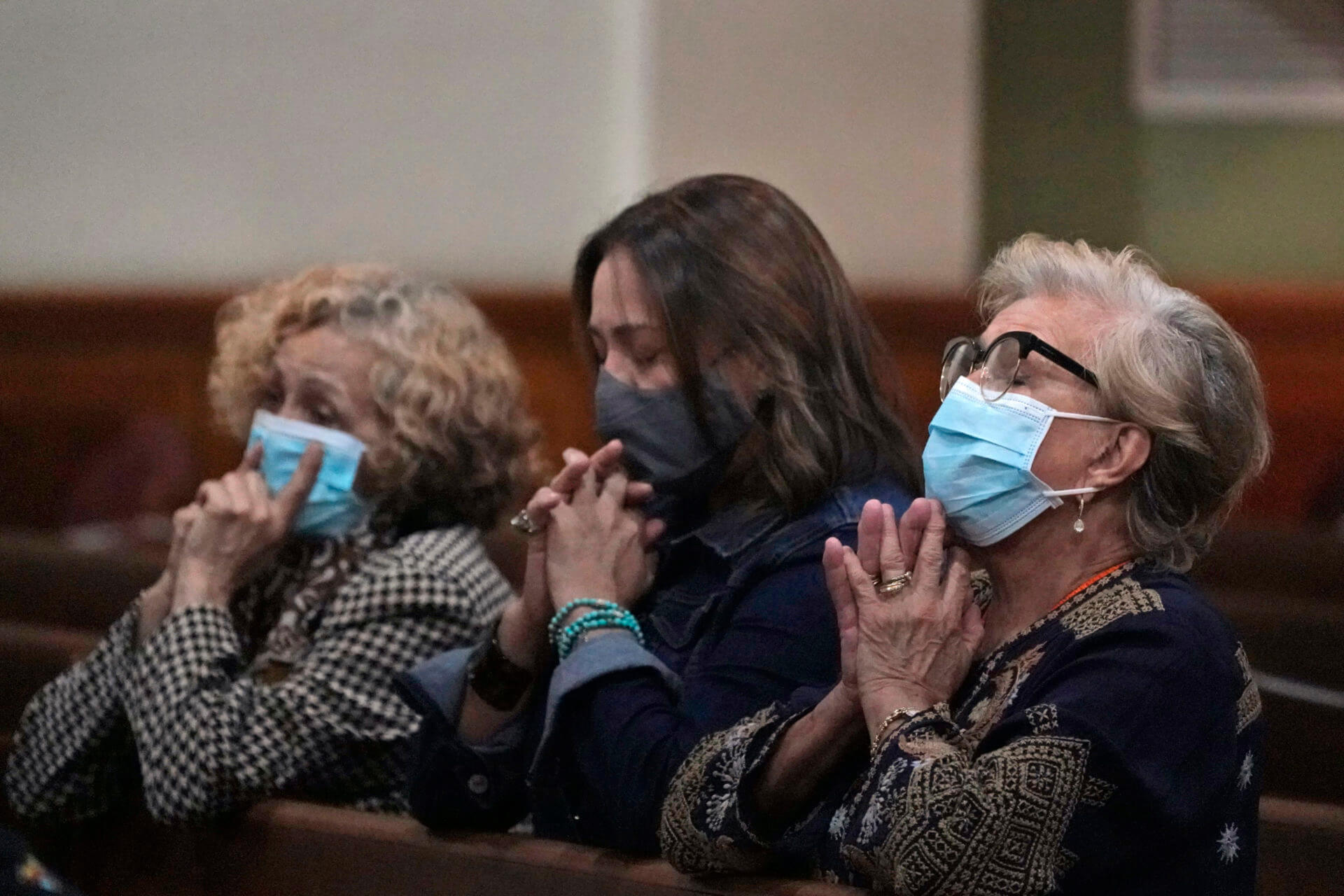 Women pray, late Saturday, June 26, 2021, during a prayer vigil for the victims and families of the Champlain Towers collapsed building in Surfside, Fla., at the nearby St. Joseph Catholic Church in Miami Beach, Fla. Many people were still unaccounted for two days after Thursday's fatal collapse. (AP Photo/Wilfredo Lee)
MORE NEWS