A Florida man who grabbed House Speaker Nancy Pelosi’s podium and posed for photographs with it during the U.S. Capitol riot was sentenced on Friday to more than two months in prison.

The image of Adam Johnson smiling and waving as he carried Pelosi’s podium went viral after the pro-Trump mob’s attack on Jan. 6, 2021. Johnson placed the podium in the center of the Capitol Rotunda, posed for pictures and pretended to make a speech, prosecutors said. 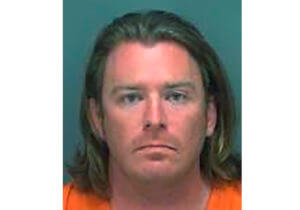 FILE – This photo made available on Jan. 8, 2020 by the Pinellas County, Fla., Sheriff’s Office shows Adam Johnson of Parrish, Fla. The Florida man was photographed carrying a lectern belonging to House Speaker Nancy Pelosi’s office at the U.S. Capitol during the Jan. 6 insurrection. (Pinellas County Sheriff’s Office via AP, File)

After driving home, Johnson bragged that he “broke the internet” and was “finally famous,” prosecutors said. They argued that his actions at the Capitol “illustrate his sense of entitlement and privilege.”

“The now-viral podium photo portrays Johnson as confident, arguably gleeful, while converting government property to his own use during an unlawful siege,” a prosecutor wrote in a court filing.

U.S. District Judge Reggie Walton sentenced Johnson to 75 days in prison followed by one year of supervised release. The judge also ordered Johnson to pay a $5,000 fine and perform 200 hours of community service. Johnson will report to prison at a date to be determined.

Johnson told Walton that posing with Pelosi’s podium was a “very stupid idea.”

“I bear no ill will toward her or her office at all,” Johnson said.

Walton said America is on a dangerous path when many citizens believe that they “have a right to do whatever in order to have the person who they want in power sitting in the White House.”

Prosecutors said they received a tip during plea negotiations with Johnson that he intended to publish a memoir. His plea agreement includes an unusual provision that requires him to relinquish compensation from any book, script, song, interview or product bearing his name or likeness, for up to five years.

Prosecutors recommended sentencing Johnson to three months’ imprisonment, one year of supervised release, a $5,000 fine and 60 hours of community service. Johnson’s attorneys asked the judge to sentence him to one year of probation with credit for the weekend that he spent in jail after his arrest.

The defense lawyers said Johnson didn’t know that the podium belonged to Pelosi when he moved it from a cloak room.

“Arguably, if he latched onto some other piece of government furniture for his photo opportunity jail time would not even be a consideration,” they wrote in a court filing.

Johnson was arrested two days after the deadly riot. He pleaded guilty in November to a charge of entering and remaining in a restricted building or ground, a misdemeanor punishable by a maximum of one year in prison.

Johnson was accompanied by a friend when he flew from Tampa, Florida, to Washington, D.C., to attend then-President Donald Trump’s “Stop the Steal” rally. They ran to the Capitol when they learned that it had been breached. Johnson, after getting separated from his friend, climbed scaffolding before he entered the building.

He jiggled the door handle to an office that he believed belonged to Pelosi, but it was locked.

“Just across the hall and only twelve minutes earlier, several of the Speaker’s staffers had barricaded themselves in a different office, terrified,” a prosecutor wrote.

As Johnson watched rioters trying to break down the doors to the House Chamber, where frightened lawmakers were trapped, he shouted that a bust of George Washington would make “a great battering ram,” prosecutors said.

“Thankfully, no one heeded his suggestion,” a prosecutor wrote.

Johnson, a stay-at-home father, is married to a medical doctor and hasn’t had to work for the past 11 years, prosecutors said. They argued that the couple could afford to hire somebody to care for their five school-age children if he were jailed.

Johnson and his wife have received death threats, his lawyers said.

“His wife’s medical practice suffered financially and some of Adam’s oldest friends will no longer speak to him or his family,” they wrote.

More than 750 people have been charged with federal crimes related to the riot. More than 200 of them have pleaded guilty, mostly to misdemeanors. At least 100 riot defendants have been sentenced, and more than 80 others have trial dates this year.