DETROIT (WXYZ) — Theodore Wafer, the man convicted of shooting and killing Renisha McBride on his front porch in 2013, was re-sentenced to 15-30 years in prison on Wednesday.

Judge Dana Hathaway ordered Wafer to serve the exact same sentence he was originally given for second-degree murder and statutory manslaughter.

In February, the Michigan Supreme Court threw out part of his conviction, saying his constitutional rights were violated when a jury was allowed to convict him of second-degree murder and involuntary manslaughter. 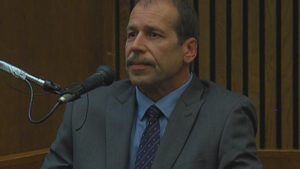 “We are pleased with the Court’s resentencing of Mr. Wafer today. There were very sound reasons for the original sentence, and it was the wisest course to give the same sentence today,” Wayne County Prosecutor Kym Worthy said in a statement.

Wafer, who is now 63, opened his front door at his Dearborn Heights home in 2013 and shot McBride, who was 19 at the time, through his screen door before dawn.

He said that he was awakened by someone pounding on his door and he feared for his life, which is why he said he fired the shot, though he did not call 911. He claimed self-defense but the jury did not find he acted in self-defense.

Wafer has served nearly eight years in prison on his sentence.

This story was originally published June 22 by WXYZ in Detroit, an E.W. Scripps Company.