ATLANTA (AP) — Prosecutors in Atlanta said they need a special grand jury to hear from U.S. Sen. Lindsey Graham because he may be able to provide insight into the extent of any coordinated efforts to influence the results of the 2020 general election in Georgia.

Fulton County Chief Senior Assistant District Attorney Donald Wakeford made that argument Wednesday during a federal court hearing on a request by Graham to quash his subpoena. Brian Lea, an attorney for Graham, argued that Graham’s position as a senator protects him from having to appear before the special grand jury in the investigation into whether former President Donald Trump and his allies committed crimes as they sought to overturn his narrow election loss in Georgia. 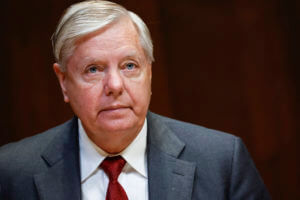 FILE – Sen. Lindsey Graham, R-S.C., listens during a hearing on the fiscal year 2023 budget for the FBI in Washington, on May 25, 2022. Attorneys for Graham said in a court filing on July 13, he wasn’t trying to interfere in Georgia’s 2020 election when he called state officials to ask them to reexamine certain absentee ballots after President Donald Trump’s narrow loss to Democrat Joe Biden. (Ting Shen/Pool Photo via AP, File)

Graham’s attorneys — including Don McGahn, who served as White House counsel under Trump — successfully moved the issue of whether the subpoena should be quashed from Fulton County Superior Court to federal court.

U.S. District Judge Leigh Martin May said she hopes to issue a ruling Friday but that it may take her until Monday to decide whether Graham should have to testify.

Fulton County District Attorney Fani Willis opened her investigation early last year, and a special grand jury with subpoena power was seated in May at her request. The special grand jury began hearing from witnesses, including Georgia Secretary of State Brad Raffensperger, in June.

Willis indicated early on that she was interested in a phone call between Graham and Raffensperger in November 2020, shortly after the election. Raffensperger said at the time that Graham asked if he had the power to reject certain absentee ballots and that he interpreted that as a suggestion to toss out legally cast votes.

Willis wrote in a court filing last month that Graham made at least two telephone calls to Raffensperger and members of his staff in the weeks after the 2020 general election.

During those calls, he “questioned Secretary Raffensperger and his staff about reexamining certain absentee ballots cast in Georgia in order to explore the possibility of a more favorable outcome for former President Donald Trump,” Willis wrote.

Graham also “made reference to allegations of widespread voter fraud in the November 2020 election in Georgia, consistent with public statements made by known affiliates of the Trump Campaign,” she wrote.

Lea argued that the U.S. Constitution provides absolute protection against Graham being questioned about legislative acts. He also said “sovereign immunity” protects a senator from being summoned by a state prosecutor and that Willis has not demonstrated extraordinary circumstances necessary to compel testimony from a high-ranking official.

Graham had to decide whether to vote to certify the votes from Georgia and also has since proposed election-related legislation, so the phone calls were part of his legislative duties, Lea argued.

Wakeford said that while Willis’s team is interested in the phone calls, that is just a starting point. He also disputed the idea that the phone calls were solely about legislative issues, saying Graham was seeking to make some changes to the way Georgia handled absentee ballots ahead of January 2021 runoff elections.

May peppered both sides with questions during the two-hour hearing but cautioned the attorneys not to read too much into her questioning, explaining that’s how she makes sure she understands the issue.

If May doesn’t quash the subpoena entirely, Lea asked her to at least set guidelines for what Graham can be asked before the special grand jury. Wakeford asked her not to quash the subpoena and to send the matter back to Fulton County Superior Court. He said the two sides can negotiate which topics can be covered and any disputes based on federal principles can be brought back to May.

Wakeford’s proposal mirrors what May ordered when U.S. Rep. Jody Hice challenged his subpoena to testify before the special grand jury. But May said she wouldn’t necessarily do the same thing in this case, noting that Hice’s attorneys had agreed to those terms.

A group of six former federal prosecutors, including former Massachusetts Gov. Bill Weld, on Wednesday filed a “friend of the court” brief in the case opposing Graham’s motion to quash his subpoena. They cite their collective decades of experience and expertise on the issues the senator raises.

“The subpoena reflects a narrowly targeted inquiry for unique evidence that is highly relevant to an ongoing criminal investigation, rather than a fishing expedition or an intrusion on legislative conduct,” their brief says.

May instructed Graham’s attorneys to respond to that brief by Thursday at noon and told Willis’s team to respond to Graham’s response by 9 a.m. Friday.