CRESCENT CITY, Fla. (AP) — The body of a 1-year-old Florida boy who had been missing for a day was found Monday in a septic tank on the property where his family lived, and investigators said evidence points to his death being accidental. 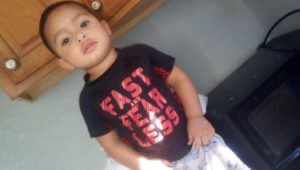 Jose Lara’s body was found in a septic tank about 35 yards (32 meters) from his family’s home in Putnam County after investigators searching for him decided to drain it, Putnam County Sheriff H.D. “Gator” DeLoach said at a news conference.

More than 120 law enforcement officers and firefighters had searched a 2-square-mile (5.2 square-kilometer) area since Sunday. The decision was made early Monday to drain the septic tank.

A plywood board that covered the septic tank initially didn’t look like it had been disturbed, but investigators believe the boy stepped on the rotted cover and fell in, DeLoach said.