HONOLULU (AP) — A biological sister of a 6-year-old Hawaii girl reported missing by their adoptive parents told police the parents forced her to keep it a secret that Isabella Kalua was not breathing inside a dog cage in the bathroom, with duct tape on her mouth and nose.

The new details were revealed in documents filed in court Friday to justify the arrests of Isaac and Lehua Kalua, who adopted Isabella and two of her siblings and were foster parents to another biological sibling, on suspicion of second-degree murder. 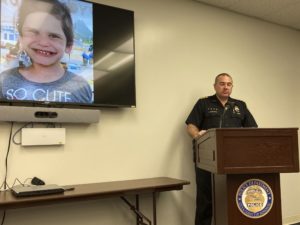 Honolulu Police Maj. Ben Moszkowicz addresses a news conference in Honolulu on Wednesday, Nov. 10, 2021, where law enforcement officers said they arrested the adopted parents of Isabella “Ariel” Kalua, shown on the screen to the left. The parents, Lehua and Isaac “Sonny” Kalua have been charged with second-degree murder in the girl’s death. Police say the girl was killed a month before they reported her missing Sept. 13, 2021. (AP Photo/Jennifer Sinco Kelleher)

The Kaluas on Sept. 13 had reported to police that Isabella — also referred to by Honolulu police by her birth name of Ariel Sellers — was missing and that they had last seen her asleep in her room the night before.

Police arrested the Kaluas on Wednesday, saying they believe the girl was killed a month before they reported her missing. But a body has not been found.

The parents were being held without bail and appeared in court via video from a cellblock on Friday.

A deputy public defender entered not guilty pleas for them, but it’s not yet clear who their attorneys will be, said state Public Defender James Tabe. He said if they both qualify for public defenders, one of them will have a private attorney appointed.

An attorney who has acted as their spokesperson, William Harrison, said he is not representing them in the case but has spoken on their behalf as a family friend.

“All I can say is I’m obviously saddened by what’s written,” he said of the court filing. “I don’t know the details.”

During an interview a week ago with a detective, Isabella’s sister said the Kaluas asked her about two months ago to keep secret what happened: That Isabella “was in the bathroom in a dog cage, duct tape on her mouth and nose, and she didn’t wake up,” according to the police affidavit in support of warrants for the Kaluas’ arrests.

The sister was identified by initials I.M.K. in the court documents, which indicate she was born in 2009.

During a news conference announcing the arrests of the Kaluas, police declined comment on why they believe Isabella is dead. The timing of the sister’s interview last Friday with the detective coincides with Honolulu police homicide Lt. Deena Thoemmes saying the case turned into a murder investigation at the end of last week.

The sister, who is older, said she knows Isabella is “dead because she was there,” the court documents said.

“Lehua then filled the bathtub with water and put (Isabella) in it to see if she would wake up, but it did not work,” the documents said.

The sister had to help carry Isabella to their bedroom, the documents said.

The mother then drained the tub and a few days later, Isaac Kalua went to a hospital pretending he had COVID-19 symptoms, the documents said.

The sister told police she knew he was pretending because he took time off work to “help mom,” the documents said, “to get rid of the stuff … evidence.” 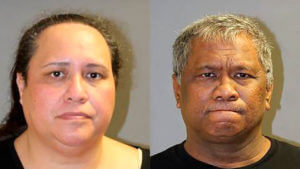 The sister told police Lehua Kalua bought the dog cage on the internet even though they didn’t have a dog. Kalua said she bought it because Isabella would sneak around at night and want to eat because she was hungry. The sister said Isabella would be hungry because Kalua wouldn’t feed her and the sister tried to sneak food to her sometimes, according to the court documents.

Isabella was kept in the cage at night, the sister told police.

After reporting Isabella missing, Lehua Kalua told police the girl had a habit of going into the garage and falling asleep and would sometimes leave doors unlocked, according to the affidavit. She also told police their home surveillance system constantly stops working.

According to the affidavit, police recovered surveillance footage on Sept. 13 that showed Isabella was last seen on cameras on Aug. 18.