AUSTIN, Texas (AP) — A Texas grand jury indicted 19 Austin police officers on charges of aggravated assault with a deadly weapon for their actions during 2020 protests over racial injustice that spread nationwide following the killing of George Floyd, according to people familiar with the matter. 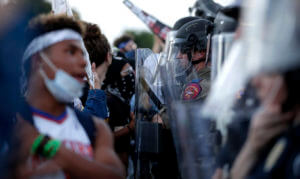 FILE – Demonstrators face members of the Austin Police Department as they gather in downtown Austin, Texas, on June 4, 2020, to protest the death of George Floyd, a black man who died after being restrained by Minneapolis police officers on Memorial Day. The Austin City Council on Thursday, Feb. 17, 2022, approved paying a combined $10 million to two people injured when officers fired beanbag rounds into crowds during the 2020 social justice protests, including a college student who suffered brain damage. (AP Photo/Eric Gay)

Multiple people spoke to The Associated Press Thursday on condition of anonymity because they were not authorized to discuss the case publicly. Austin Police Association President Ken Cassidy confirmed 19 officers are facing charges but did not have details.

It ranks among the most indictments on a single police department in the U.S. over tactics used by officers during the widespread protests — methods that led to the resignation or ouster of several police chiefs across the country.

Word of the indictments came hours after Austin city leaders approved paying $10 million to two people injured by police in the protests, including a college student who suffered brain damage after an officer shot him with a beanbag round.

Combined, the charges and settlements amounted to conservative Texas’ liberal capital of 960,000 people taking some of its biggest actions as criticism still simmers over its handling of the protests, which intensified pressure on then-Police Chief Brian Manley to eventually step down.

Jose Garza, the district attorney for Travis County, which includes Austin, spoke to journalists Thursday afternoon about the grand jury investigation but gave no specifics about it, including how many officers are facing charges, and for what crimes.

A spokesperson for the Travis County District Attorney’s office, Ismael Martinez, declined to comment on the number of officers charged and referred reporters to Garza’s comments.

Prosecutors have not identified any of the officers facing charges. Texas law requires that an indictment remain secret until an officer has been arrested. Aggravated assault with a deadly weapon, when committed by a public servant, could carry a sentence of up to life prison. 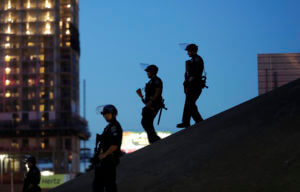 FILE – Austin police keep watch as demonstrators gather on June 4, 2020, in downtown Austin, Texas, as they protest the death of George Floyd, a black man who died after being restrained by Minneapolis police officers on Memorial Day. The Austin City Council on Thursday, Feb. 17, 2022, approved paying a combined $10 million to two people injured when officers fired beanbag rounds into crowds during the 2020 social justice protests, including a college student who suffered brain damage. (AP Photo/Eric Gay, File)

Cassidy, the president of the Austin Police Association, called the move “devastating” for law enforcement in the city, but also said he’s confident that no officer will be convicted. He criticized Garza, calling the investigation politically motivated.

“DA Garza ran on a platform to indict police officers and has not missed the opportunity to ruin lives and careers simply to fulfill a campaign promise,” Cassidy said.

Garza said his office prosecutes anybody who causes harm “regardless of who causes it.”

Austin Chief of Police Joseph Chacon, who took the job after Manley left, said he respects the grand jury process but was “extremely disappointed” to hear the district attorney announce anticipated indictments of his officers.

Chacon stressed that his command staff had prepared officers to face hundreds of people when thousands actually showed up to protests that he said were at times “righteous and violent.”

“I am not aware of any conduct, that given the circumstances that the officers were working under, would rise to the level of a criminal violation by these officers,” Chacon said.

But beanbag rounds fired by officers did not always perform “in the manner anticipated,” Chacon said, and his agency now prohibits the use of “less lethal munitions in crowd-control situations.”

The settlements approved Thursday are among the largest paid to people who were injured by police across the U.S. during massive protests that followed Floyd’s death.

The largest of the Austin settlements gives $8 million to Justin Howell, who was 20 years old when police shot him with a beanbag round. Family members told the AP following the incident that Howell suffered a cracked skull and brain damage, leaving him in critical condition for multiple days.

The city will also pay $2 million to Anthony Evans, who was 26 when an Austin police officer shot him with a beanbag round in a separate incident, which resulted in extensive medical treatment in his jaw.

Austin Mayor Steve Adler said the settlements “remind us of a real difficult and painful moment in our city.” A representative for the Howell family did not immediately respond to a request for comment.

It is the latest reflection of how, two years after the protests that swept across the country, cities are still addressing the injuries and tactics used by police. Earlier this month, prosecutors announced charges against two Dallas police officers accused of injuring demonstrators after firing less lethal munitions.

After the protests in Austin, then-police Chief Manley later said Howell was not the intended target after an altercation in a crowd, which he said involved people who threw objects at a line of officers. Authorities have said that led to the officers firing at the mass of protestors from above.

David Frost, who captured on video the moments after Howell was shot, told the AP that he saw protesters throwing fist-sized rocks and water bottles at the line of police on an overpass. Then he saw Howell fall. He was bleeding heavily and went into a seizure, Frost said at the time.

The settlements are the second and third payments awarded among a dozen lawsuits filed in Austin that have claimed injuries from the protests. Earlier this month, The Austin American-Statesman reported that a $150,000 settlement was approved for a woman named Ariana Chavez, who was shot in the head with less lethal munition resulting in a concussion.

At least 19 people were hospitalized in Austin following the protests.

Eleven officers were disciplined for their actions in the early summer protests, with seven additional officers placed on administrative duty.

Coronado is a corps member for the Associated Press/Report for America Statehouse News Initiative. Report for America is a nonprofit national service program that places journalists in local newsrooms to report on undercovered issues.