WASHINGTON (AP) — Stephen King didn’t break any legal ground on the stand Tuesday as he testified against his own publisher’s efforts to merge with Penguin Random House. But he did know how to please a crowd and even get the judge to thank him for his time.

“It was a real pleasure to hear your testimony,” the otherwise businesslike U.S. District Judge Florence J. Pan told the author after he finished speaking as a government witness in a federal antitrust lawsuit against the merger of Penguin Random House and Simon & Schuster, King’s longtime publisher. 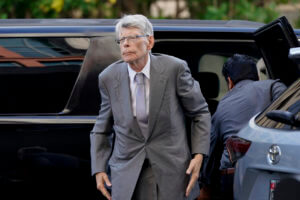 Author Stephen King arrives at federal court before testifying for the Department of Justice as it bids to block the proposed merger of two of the world’s biggest publishers, Penguin Random House and Simon & Schuster, Tuesday, Aug. 2, 2022, in Washington. (AP Photo/Patrick Semansky)

The 74-year-old King had a haunting but gregarious presence, his gaunt features accented by his gray suit and gray sneakers, his walk tentative, as it has been since he was struck by a van and badly injured in 1999. But once sworn in, he was relaxed and happy to talk, and ever alert to how to tell a story,

“My name is Stephen King. I’m a freelance writer,” King said upon being asked to identify himself. The Justice Department is bidding to convince Pan that the proposed combination of Penguin Random House and Simon & Schuster, two of the world’s biggest publishers, would thwart competition and damage the careers of some of the most popular authors — a status King holds like few others.

King’s remarkable career, with so many bestsellers he could only offer an estimate, has come amid waves of consolidation in the industry. As he noted in his remarks, there were dozens of publishers in New York when his breakthrough novel, “Carrie,” came out, in 1974, and he has seen many of them either acquired by larger companies or forced out of business.

Over the first two days, attorneys for the two sides have presented notably contrasting views of the book industry. The Justice Department sees an increasingly limited market for bestsellers, with the Big Five well in command. Penguin Random House’s side sees book publishing as dynamic and open to many, with the proposed merger having limited impact.

King’s appearance in U.S. District Court in Washington — highly unusual for an antitrust trial — brought a narrative of the evolution of book publishing toward the dominance of the Big Five companies. As government attorney Mel Schwarz walked King through his history starting as a new, unknown author in the 1970s and his relationships with agents and publishers, King homed in on a critique of the industry as it is now.

King crisply answered Schwarz’s questions, with some moments of humor and brief flashes of gentle outrage, as he testified during the second day of the trial expected to last two to three weeks.

“The Big Five are pretty entrenched,” he said.

Under questioning later in the day, Simon & Schuster CEO Jonathan Karp detailed a world of fiercely competitive bidding among publishers — including between his firm and Penguin Random House — for authors’ works, sometimes besting each other by millions of dollars for high-profile writers.

With his possible future boss, Penguin Random House Markus Dohle, among those looking on in the courtroom, Karp rejected the Big Five moniker, calling it “parochial and ethnocentric.”

“I think there are a lot of good publishers all over the country. It’s not all about us,” Karp said.

But Justice Department attorney Jeff Vernon brought forward a message Karp had sent to John Irving, his favorite author, saying he didn’t think the government would allow Simon & Schuster and Penguin Random House to merge. “That’s assuming we still have a Department of Justice,” Karp wrote in the message.

At one point, the judge appeared to support a core government argument — that greater concentration in the industry could reduce the compensation paid to authors. Through two days of testimony, Pan said, “there’s a sense that competition raises the amounts of advances” and less competition lowers them.

King’s displeasure about the proposed merger led him to voluntarily testify for the government. 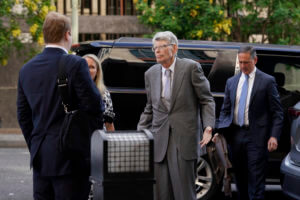 Author Stephen King arrives at federal court before testifying for the Department of Justice as it bids to block the proposed merger of two of the world’s biggest publishers, Penguin Random House and Simon & Schuster, Tuesday, Aug. 2, 2022, in Washington. (AP Photo/Patrick Semansky)

“I came because I think that consolidation is bad for competition,” King said. The way the industry has evolved, he said, “it becomes tougher and tougher for writers to find money to live on.”

King expressed skepticism toward the two publishers’ commitment to continue to bid for books separately and competitively after a merger.

“You might as well say you’re going to have a husband and wife bidding against each other for the same house,” he quipped. “It would be sort of very gentlemanly and sort of, ‘After you’ and ‘After you,'” he said, gesturing with a polite sweep of the arm.

King’s was entertaining and informative, although he had little specific to say over how the merger might harm bestselling authors, with the government’s case focusing on those receiving advances of $250,000 or more. Attorney Daniel Petrocelli, representing the publishers, told King he had no questions for him and demurred on a cross-examination, saying instead he hoped they could have coffee together some time.

King has long been a public favorite, and spoke warmly Tuesday of “living the dream,” paying all the bills while working at something he loves. But the author of “The Stand,” “The Shining” and many others wonders who else might have the chances he did. He was not chosen by the government just for his fame, but for his public criticism of the $2.2 billion deal announced in late 2021, potentially forming what rival CEO Michael Pietsch of Hachette Book Group has called a “gigantically prominent” entity.

“The more the publishers consolidate, the harder it is for indie publishers to survive,” King tweeted last year.

King’s affinity for smaller publishers is personal. Even while continuing to publish with the Simon & Schuster imprint Scribner, he has written thrillers for the independent Hard Case Crime. Years ago, the publisher asked him to contribute a blurb, but King instead offered to write a novel for them, “The Colorado Kid,” released in 2005. He has also written fiction for other small companies, saying some of his work doesn’t have the kind of commercial power the Big Five might expect.

King himself would likely benefit from the Penguin Random House-Simon & Schuster deal, but he has a history of favoring other priorities beyond his material well-being. He has long been a critic of tax cuts for the rich, even as “the rich” surely includes Stephen King, and has openly called for the government to raise his taxes.

“In America, we should all have to pay our fair share,” he wrote for The Daily Beast in 2012.