DENVER (AP) — Relatives, lawmakers and other supporters of a trucker sentenced to 110 years in prison after an explosive brake-failure crash that left four people dead rallied in Denver on Wednesday to plead for clemency.

Supporters of Rogel Aguilera-Mederos say the sentence is deeply unjust and truck drivers around the country have taken up his cause, using hashtags like #NoTrucksToColorado and #NoTrucksColorado.

Speaking at the rally at the state Capitol, Leonard Martinez, one of the lawyers representing Aguilera-Mederos, said the injustice of such long sentences needs to be addressed, both by reforming sentencing laws but also looking at the actions of prosecutors and judges.

“This fight is not just for him but for all,” he said.

The Colorado judge has said mandatory-minimum sentencing laws forced him to impose the long prison term after Aguilera-Mederos was convicted of vehicular homicide and other charges. 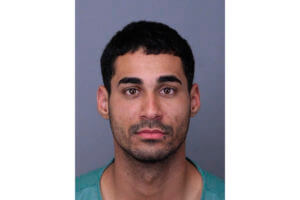 His family said in a statement they do not want to minimize the loss of those killed in the crash, but are calling on Gov. Jared Polis to “take immediate action” to reduce the sentence for the 26-year-old man with no criminal record. He was not under the influence of drugs or alcohol and fully cooperated with investigators, supporters said in a statement. More than 4.7 million people have signed an online petition asking for a commutation.

Polis, a Democrat, said Tuesday he is reviewing a clemency application.

Prosecutors asked for a reconsideration of the sentence after the outcry. But they also noted the driver declined plea deal negotiations and said the convictions recognize harm caused to crash victims.

A hearing has been scheduled to discuss the reconsideration request on Monday.

In a statement Wednesday, District Attorney Alexis King said the victims and their families want to be heard as the resentencing request is considered.

“Our primary concern is ensuring that they are able to share with the court how this incident has impacted their lives as the court considers the appropriate sentence and follows the process set forth in the law,” said King, who asked for patience from those seeking an immediate resolution.

Aguilera-Mederos’ trial attorney, James Colgan, said Wednesday that King, who inherited the case from her predecessor, could have dropped some of the charges against him if she wanted a different sentence to be reached, given the state’s laws.

Colgan said he is open to having either the governor or the judge decide a new, fair sentence. He declined to say what that might be.
“When there’s tragedy on both sides, there’s got to be a happy medium, because ruining someone’s life isn’t going to make life better for the victims,” said Colgan.

Aguilera-Mederos testified that he was hauling lumber when the brakes on his semitrailer failed as he was descending a steep grade of Interstate 70 in the Rocky Mountain foothills in spring 2019. His truck plowed into vehicles that had slowed because of another wreck outside Denver, setting off a chain-reaction wreck and a fireball that consumed vehicles and melted parts of the highway.

He wept as he apologized to the victims’ families at his Dec. 13 sentencing.

“I am not a murderer. I am not a killer. When I look at my charges, we are talking about a murderer, which is not me,” he said. “I have never thought about hurting anybody in my entire life.”

Prosecutors argued he should have used a runaway ramp designed for such situations. Aguilera-Mederos, for his part, said he was struggling to avoid traffic and trying to shift to slow down.

District Court Judge Bruce Jones said at sentencing that mandatory minimum sentencing laws required consecutive sentences on 27 counts of vehicular assault, assault, reckless driving and other charges. “I will state that if I had the discretion, it would not be my sentence,” the judge said.

“This person should spend some time in prison and think about his actions,” Evans said, adding she and other victims’ relatives object to a “public narrative” that Aguilera-Mederos is a victim. “We are truly the victims,” she said.