MEMPHIS, Tenn. (AP) — A Tennessee man accused of killing four people and wounding three others in a livestreamed shooting rampage that paralyzed Memphis and led to a city-wide manhunt was granted a public defender during Friday morning court appearance and will remain jailed on a first-degree murder charge.

Ezekiel Kelly, 19, told a judge he could not afford a lawyer for accusations in Wednesday’s attack that caused panic and fear across the city. 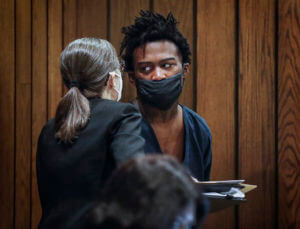 Defendant Ezekeil Kelly, right talks with a lawyer with the public defenders office while making his first court appearance on Friday, Sept. 9, 2022 in Memphis, Tenn. Kelly is accused of killing four people and wounding three others in a livestreamed shooting rampage that paralyzed Memphis and led to a city-wide manhunt. (Mark Weber/Daily Memphian via AP)

Additional charges are expected. District Attorney Steve Mulroy said outside court that bond is not warranted due to the violent nature of the alleged crimes.

The hours-long rampage had police warning residents to shelter in place, locking down a baseball stadium and university campuses and suspending public bus services as frightened residents wondered where the man might strike next. Kelly was arrested late Wednesday after crashing a stolen car while fleeing police.

The violence unfolded just a few months after Kelly was released early from a three-year prison sentence for a pair of shootings in 2020.

The bloodshed played out as the city was still reeling from the brutal killing of jogger Eliza Fletcher who was abducted during her early morning run less than a week earlier.

“This has been a horrific week for the city of Memphis,” Police Director Cerelyn “CJ” Davis said.

Authorities offered no explanation Thursday of a possible motive. Nor did they say how Kelly managed to obtain the gun or guns used in the attacks.

The Shelby County public defender’s office did not return a call seeking comment on Kelly’s case. 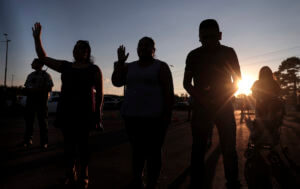 Mourners pray in the parking lot of an AutoZone, which was one of several crime scenes left in the wake of a shooting spree Thursday, Sept. 8, 2022 in Memphis, Tenn. Police say a gunman terrorized Memphis for hours as he cruised the streets shooting people, apparently at random. Four people were killed and three others were wounded.. (Patrick Lantrip/Daily Memphian via AP)

Memphis has also been shaken by other high-profile killings in recent weeks, including the shooting of a pastor during a daylight carjacking in her driveway and the shooting of an activist during an argument over money.

Mayor Jim Strickland told reporters Thursday he was outraged that Kelly had been released early from prison in March after pleading guilty last year to aggravated assault charges.

“This is no way for us to live, and it is not acceptable,” said Strickland, who later pounded the podium as he demanded accountability. He added: “If Mr. Kelly served his full three-year sentence, he would still be in prison today, and four of our fellow citizens would still be alive.”

In February 2020, Kelly, then 17, was charged as an adult with attempted first-degree murder and other crimes in two shootings committed a few hours apart. Both victims survived but did not cooperate with prosecutors, according to court records, and Kelly pleaded guilty to reduced charges of aggravated assault in April 2021.

Kelly was sentenced to three years in prison, but was released in March after serving just over two years behind bars, including credit he received for time he was jailed prior to his plea. 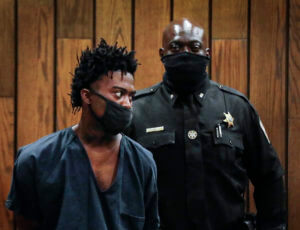 Ezekeil Kelly, left makes his first court appearance on Friday, Sept. 9, 2022 in Memphis, Tenn. Kelly is accused of killing four people and wounding three others in a livestreamed shooting rampage that paralyzed Memphis and led to a city-wide manhunt. (Mark Weber/Daily Memphian via AP)

Juvenile Court records reviewed by The Associated Press showed both shootings took place when it was dark outside and when both victims were helping other people move. Gunshots came from a car with more than one person inside on both occasions, records showed.

The man who was shot in the chest testified he was hit while trying to take cover and the shots lasted five minutes. He positively identified Kelly in court, records showed.

“Given the defendant’s age, previous contacts with the Court and the nature of the delinquent acts, the Court does not believe there is specific time to rehabilitate the child by use of procedures, services and facilities available to the Court in this state,” a court order said.

Months before his release, Kelly was denied parole in September 2021.

Ahead of that decision, he said at a parole board hearing that he had left high school during 11th grade because he had an anger management problem. On an assessment for inmate risks and needs, a parole hearing official said he scored high for “violent,” according to a recording of the hearing.

“I was going to anger management,” Kelly, then 18, said at the hearing. “I didn’t know how to cope with it at the time because I was a teenager.”

He said he had been “affiliated” – meaning, with a gang – but wasn’t anymore, saying, “as I got older, I separated myself from that type of groups.” He said he previously worked at a fast-food restaurant and a poetry club.

At the time, his fiancée wrote a letter to parole officials, saying the couple had talked about Kelly going to trade school and starting a new life.

In recommending against parole, the hearing officer in part cited “the seriousness of your offense, being that someone was shot – I know that you said that you weren’t there – but you do have the conviction.”