ATLANTA (AP) — A federal jury on Wednesday returned a guilty verdict on six of seven charges against a suspended Georgia sheriff accused of violating the constitutional rights of people in his custody by unnecessarily strapping them into restraint chairs.

Prosecutors said Victor Hill, who was suspended as Clayton County sheriff after his indictment last year, had detainees strapped into restraint chairs for hours even though they posed no threat and complied with deputies’ instructions. The use of the chairs was unnecessary, was improperly used as punishment and caused pain and bodily injury in violation of the civil rights of seven men, prosecutors argued. Defense attorneys asserted that Hill used the restraint chair legally to maintain order at the jail and didn’t overstep his lawful authority.

Hill testified last week that he based his decisions to use the restraint chairs on indicators such as the way the men behaved before they arrived at the jail, including eluding police or assaulting women, The Atlanta Journal-Constitution reported.

The jury on Monday told the judge they were deadlocked on most of the charges and she read them what is known as an Allen charge, which urges jurors to continue deliberating to reach a unanimous verdict. She read them a second Allen charge on Wednesday, Findling said.

The jury foreperson told the judge Tuesday that she and other jurors had concerns about one juror, and on Wednesday sent the judge a note saying that one juror was failing to follow instructions, the Journal-Constitution reported. The judge questioned both the foreperson and the juror in question in open court.

Findling, who had moved multiple times for a mistrial, said the situation — where one juror was singled out and felt he had to defend himself during deliberations — was concerning.

“Our review of case law from this circuit and around the country would indicate that given what we experienced, this conviction will struggle to survive legal review by an appellate court,” Findling told The Associated Press.

Prosecutors said the chair is meant to be used to keep a violent or uncontrollable person from hurting himself or others. Instead, they said, Hill used it as punishment, keeping some of the men strapped in so long that they urinated on themselves. 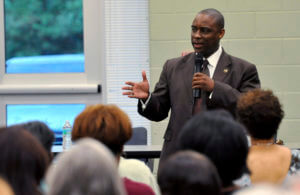 Hill has attracted both vocal critics and fierce supporters since he first became sheriff in 2005, adopting a tough-on-crime attitude and favoring Batman imagery on social media and in campaign ads. He fired 27 deputies his first day on the job, though a judge later ordered them reinstated, and used a tank owned by the sheriff’s office during drug raids.

He lost a bid for reelection in 2008 after his first term. But the voters of Clayton County, just south of Atlanta, returned him to office in 2012 even though he was under indictment at the time, accused of using his office for personal gain. A jury ultimately acquitted him on all 27 charges in that case.

In 2016, he pleaded no contest to a reckless conduct charge after he shot and injured a woman in a model home in Gwinnett County, north of Atlanta. He and the woman both said the 2015 shooting was accidental and happened while they were practicing police tactics.