STOCKHOLM (AP) — An 18-year-old man who attacked and killed two teachers with an ax at a southern Swedish high school was found guilty of two counts of murder on Thursday and sentenced to life in prison.

In Sweden, that generally means a minimum of 20 to 25 years in prison, but it could be extended. 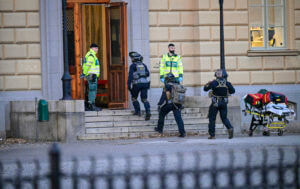 FILE – Police officers attend the scene at a school in Malmo, Sweden on Monday, March 21, 2022. A Swedish court has sentenced an 18-year-old man to life in prison for killing two teachers with an ax at a southern Swedish high school in March. In Sweden, such sentence generally means a minimum of 20 to 25 years in prison, but it could be extended. (Johan Nilsson/TT News Agency via AP, File)

Fabian Vidar Cederholm, who was a student at the school in Malmo, Sweden’s third-largest city, was arrested shortly after the incident on March 21. The defendant wasn’t previously known to authorities and had no criminal record. Both victims — Victoria Edström and Sara Böök — were found on the third floor of the downtown Malmo Latin School 10 minutes after police were alerted.

The Malmo District Court followed the line of prosecutor Johanna Liljeblad who had asked that Cederholm who has confessed to the crime, be sentenced to life. The court said Cederholm killed them “by hacking them to death with an ax.” Judge Johan Kvart said Cederholm also used a knife.

The court said he was sentenced to life in prison because “the acts were particularly reckless,” and added that the motive for the violent acts has not been fully clarified.

“These are two very brutal murders where the victims suffered severely,” Kvart said in a statement.

A lawyer for the defendant earlier had told Swedish media that the actions of the defendants were “completely inexplicable.”.

Students at the school, which has about 1,100 students, had gathered to work on a musical, and students locked themselves inside classrooms when the attack began.