SURFSIDE, Fla. (AP) — A somber moment of silence marked the end of the two-week search for survivors of a Florida condominium collapse, as rescue workers stood at solemn attention and clergy members hugged a line of local officials while many of them sobbed.

The painstaking search for survivors shifted to a recovery effort at midnight Wednesday after authorities said they had come to the agonizing conclusion that there was “no chance of life” in the rubble of the Champlain Towers South condo building in Surfside. 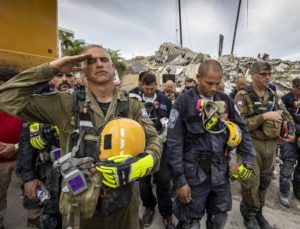 A member of the Israeli search and rescue team, left, salutes in front of the rubble that once was Champlain Towers South during a prayer ceremony, Wednesday, July 7, 2021, in Surfside, Fla. Members of search and rescue teams and Miami-Dade Fire rescue, along with police and workers who have been working at the site of the collapse gathered for a moment of prayer and silence next to the collapsed tower. (Jose A Iglesias/Miami Herald via AP)

“We have all asked God for a miracle, so the decision to transition from rescue to recovery is an extremely difficult one,” Miami-Dade Mayor Daniella Levine Cava said at a news conference.

The death toll stood at 54 late Wednesday. Officials said 86 people were unaccounted for, although detectives were still working to verify that each of those listed as missing was actually in the building when it collapsed.

Rescuers had spent two weeks digging through the rubble, searching in vain for any sign of life, Levine Cava said.

“They’ve used every possible strategy, and every possible technology available to them to find people in the rubble,” she said. “They’ve removed over 7 million pounds of concrete and debris from the mound. They’ve used sonar, cameras, dogs, heavy machinery. They’ve searched for void spaces and they’ve searched for victims. They ran into a building they were told could collapse, and they braved fire, smoke, torrential rain, and strong winds in the hopes of finding people alive.”

Hours before the formal transition from rescue to recovery mission, those emergency workers joined local officials, rabbis and chaplains in a moment of silence.

An accordion player unseen on a nearby tennis court played Aaron Copland’s “Fanfare for the Common Man,” which was followed by a piccolo playing “The Battle Hymn of the Republic.” Firefighters from Ohio, Pennsylvania, New Jersey, the federal government and elsewhere were also present.

On a tall nearby fence, families and well-wishers had posted photos of the victims, supportive messages and flowers. Firefighters hung a banner atop the fence that read “Miami-Dade Fire Rescue Mourns With You.”

Officials vowed to continue the recovery efforts until they find the remains of every one of the missing.

“Our sole responsibility at this point is to bring closure,” he said, as relatives cried in the background.

Later, during a news conference, Jadallah said crews remained committed to doing whatever it takes to finish the job. 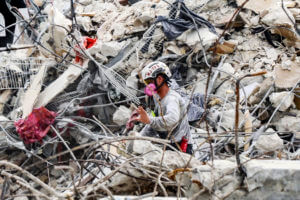 A search and rescue team member moves through the rubble of the Champlain Towers South condo, Wednesday, July 7, 2021. (Al Diaz/Miami Herald via AP)

Dennis Dirkmaat, an anthropology professor who chairs the Department of Applied and Forensic Sciences at Mercyhurst University, said he expects crews will use heavy equipment in a “top down approach” to methodically lift material off the debris pile, place it in containers and evaluate it for evidence of human remains. He said the process would likely be repeated as the crews move to subsequent floors.

“It’s still a process, slow, tedious process of removing all of this debris. And so it’s going to take a while,” he said.

Hope of finding survivors was briefly rekindled after workers demolished the remainder of the building, allowing rescuers access to new areas of debris.

Some of those voids did exist, mostly in the basement and the parking garage, but no survivors emerged. Instead, teams recovered more than a dozen additional victims. Because the building fell in the early morning hours, many were found dead in their beds.

No one has been pulled out alive since the first hours after the 12-story building fell on June 24.

Twice during the search operation, rescuers had to suspend the mission because of the instability of the remaining part of the condominium building and the preparation for demolition.

After initially hoping for miraculous rescues, families had slowly braced themselves for the news that their relatives did not survive.

“For some, what they’re telling us, it’s almost a sense of relief when they already know (that someone has died) and they can just start to put an end to that chapter and start to move on,” said Miami-Dade firefighter and paramedic Maggie Castro, who has updated families daily.

Authorities are launching a grand jury investigation into the collapse and at least six lawsuits have been filed by Champlain Towers families. 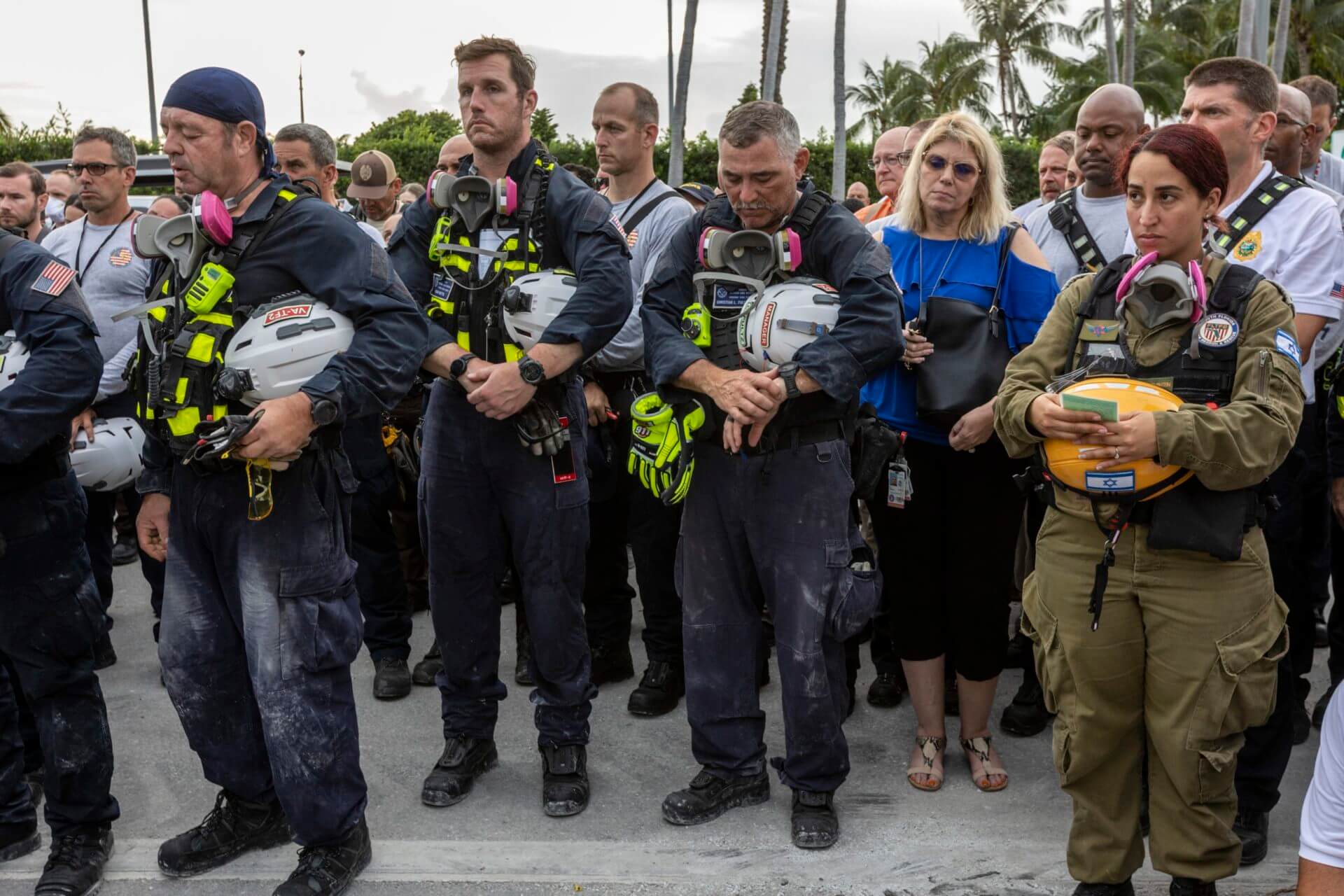 Members of a search and rescue team stand in front of the rubble that once was Champlain Towers South during a prayer ceremony in Surfside, Fla., Wednesday, July 7, 2021. Members of search and rescue teams and Miami-Dade Fire rescue along with police and workers who have been working at the site of the collapse gathered for a moment of prayer and silence next to the collapsed tower. (Jose A Iglesias/Miami Herald via AP)
MORE NEWS