TEMPE, AZ (KNXV) — Two Valley law enforcement agencies are investigating how three Tempe police officers responded to a man who was drowning less than 50 yards away from them.

Sean Bickings, 34, passed away in Tempe Town Lake on May 28. The City of Tempe released partial body camera footage from the incident, which revealed three officers watched from the walkway as Bickings and his partner pleaded for police to help prevent the drowning.

Police were called to the bridge, just north of the Tempe Center for the Arts, just after 5 a.m. for a domestic disturbance between Bickings and his partner.

The couple denied that a physical fight had taken place though, so neither were arrested.

Officers did run their names through a database to check for warrants.

Bickings had a few active warrants for minor drug charges. While the check was being run through the system, Bickings climbed a fence and, despite officers telling him not to, jumped into Tempe Town Lake.

“You’re not allowed to swim in the lake, man,” said the officer.

Swimming in the lake is a civil violation, not a criminal offense. So, officers did not stop or detain him.

Bickings swam about 40 yards out.

Minutes later he started struggling and calling for help.

“Go at least, go to the pylon and hold on,” said another.

“Come back over to the pylon,” the officer repeated. 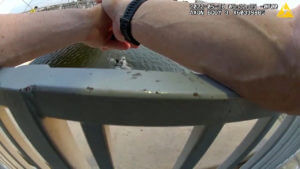 A portion of police bodycam footage has been released by the City of Tempe to show the moments leading up to the incident. (City of Tempe via KNXV)

“Okay, I’m not jumping in after you.”

Since the story was picked up nationally, there has been criticism of the officers’ response. Law enforcement experts though, say it was likely not out of line with policy and self-preservation.

ABC15 asked, “Do officers have an obligation to jump in after somebody is in distress?”

“No, they don’t, we run into an understanding that was established by the Supreme Court that law enforcement does not have a duty to protect,” said Lon Bartel, a former Peoria police officer turned use-of-force expert.

“There’s not an actual duty that’s established. And that’s something that people don’t understand,” he added.

There is also risk associated with trying to rescue someone who is drowning.

“They will climb on top of you do everything they can to keep their head above water and in the process shove you underneath,” said Bartel.

“That can be very dangerous, but it’s also the case that there’s usually a bunch of other things that you can do,” said Clark Neily, Senior Vice President for Legal Studies at the Cato Institute in Washington D.C. “You can look for some object to that would float that they could grab on to…It’s pretty unusual that there would be a situation where there’s literally nothing you can do without exposing yourself to tremendous risk.”

The Tempe Officers Association released a statement Monday stating that its officers do not have water rescue training or have the equipment to help people at risk of drowning.

The union also stated, “Moving forward, we will work for a change in how the City and TPD approach potential water incidents in Tempe Town Lake, including instituting training and equipment changes. We will work with the City and the community to ensure that such an incident never happens again.”

Neily understands why officers did not jump into the water, given the potential risk of drowning themselves. But he also wonders about how the situation might be different if the victim was a colleague.

“If it had been a fellow police officer in that lake struggling and about to drown – how likely do you think it is that these three [officers] couldn’t have thought of anything to do in order to assist without exposing themselves to risk?”

Tempe did not release the full body camera video citing the sensitive nature and out of respect for Bickings’ loved ones.

This story was originally published June 6 by KNXV in Phoenix, an E.W. Scripps Company.