NASHVILLE, Tenn. (AP) — A Tennessee man is accused of being violent during the Jan. 6 riot at the U.S. Capitol, federal officials said.

The charges against Joshua John Portlock, 40, of Smyrna, include engaging in physical violence in a restricted building or grounds, civil disorder, and assaulting, resisting, or impeding certain officers, according to a statement from the Justice Department. 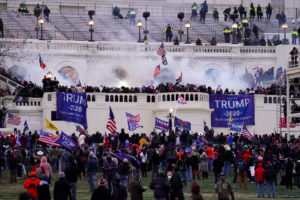 He was arrested Wednesday in Smyrna and made his initial court appearance in the Middle District of Tennessee. He was released pending a Nov. 9 hearing in the District of Columbia.

Portlock was part of a crowd that pushed and removed barriers supporting a line of police officers, according to court documents. When police then established a perimeter line closer to the Capitol, Portlock picked up a large piece of what appeared to be plywood and pushed it against a group of officers and later joined others attempting to push through a line of officers, documents said.

“He was in this area for approximately 15 to 20 minutes, assaulting and obstructing officers and assisting others in collectively using their body mass to push back the line of law enforcement,” the Justice Department said.

Portlock also appeared to provide assistance to two officers who had been assaulted by other rioters, the statement said.

It was not immediately clear if Portlock has an attorney.

So far, more than 650 people have been arrested and charged with federal crimes in connection with January’s insurrection. More than 100 riot defendants have pleaded guilty, mostly to misdemeanors punishable by a maximum of six months incarceration.