HOUSTON (AP) — A 22-year-old college senior who was critically injured at the Astroworld festival in Houston has died, the family’s lawyer said Thursday, making her the 9th person to die after throngs of fans surged toward the stage during a performance by headliner Travis Scott. 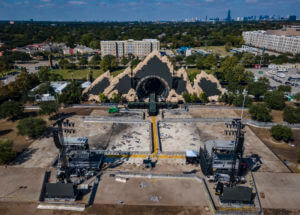 The Astroworld main stage where Travis Scott was performing Friday evening where a surging crowd killed eight people, sits full of debris from the concert, in a parking lot at NRG Center on Monday, Nov. 8, 2021, in Houston. ( Mark Mulligan/Houston Chronicle via AP)

“Bharti was a shining star in the community,” Lassiter said. “She was a sister, a daughter, a high-achieving college student about to graduate from Texas A&M University with high, high grades.”

Shahani’s family said she had been studying electronics systems engineering.

Her mother, Karishma Shahani, became emotional during the news conference. She pointed to her heart as she cried: “What happened to her? I want my baby back. I’m empty here.”

Officials have not disclosed details about any of the fans who were hospitalized, but the family of a 9-year-old boy who attended the concert with his father has said the child was in a medically induced coma after sustaining injuries to his heart, lungs and brain.

Hundreds more people were injured in the surge Friday night as Scott took to the stage. A criminal investigation into the deaths at Astroworld is underway.

Scott was only minutes into his headlining show at the Astroworld music festival when at least one Houston officer radioed over a police channel that the main stage had been compromised by a massive crowd surge.

The police radio traffic from the Friday night concert, obtained by the Houston Chronicle, reveals how quickly law enforcement became aware of the rising danger in the throng of concertgoers shortly after the star rapper began performing at the sold-out music festival, which drew about 50,000 people.

Scott took the stage in his hometown of Houston shortly after 9 p.m.

“Looks like folks are coming out of the crowd complaining of difficulty breathing, crushing-type injuries,” one official said over the police radio around 9:21 p.m., according to the audio obtained by the newspaper. “Seems like the crowd is compressing on itself.” 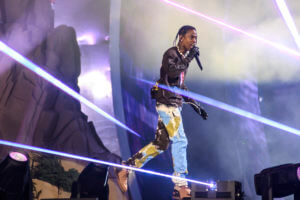 Travis Scott performs at Astroworld Festival at NRG park on Friday, Nov. 5, 2021 in Houston. Several people died and numerous others were injured in what officials described as a surge of the crowd at the music festival in while Scott was performing. Officials declared a “mass casualty incident” just after 9 p.m. Friday during the festival where an estimated 50,000 people were in attendance, Houston Fire Chief Samuel Peña told reporters at a news conference.(Jamaal Ellis/Houston Chronicle via AP)

Scott kept performing his set, which lasted about an hour. His attorneys have said he did not know about the tragedy unfolding in the crowd until after the show. The newspaper reported that officers spotted people leaving the crowd but that their voices remained calm through the first half hour.

“I’m at the medical tent,” one officer radioed in around 9:30 p.m. “There’s a lot of people trampled and they’re passed out at the front stage.”

Later, another officer says: “We’re getting multiple reports of people getting injured. We have another report of cardiac situation with CPR by the stage.”

Houston Police Chief Troy Finner said Wednesday that police told organizers to shut down the performance when fans in the crowd were administered CPR. Authorities gave word around 10:03 p.m. that the concert was in the process of shutting down, but witnesses say Scott and Drake, the superstar rapper who came on toward the end of Scott’s set as a special guest, kept performing.

Finner repeatedly refused to provide timelines Wednesday in what was just his second press briefing since the tragedy, saying the case was still under investigation. He said more than 500 officers were working the festival, more than double the number assigned in 2019, the last time the festival was held.

But Finner said festival organizers had not provided clear records of how many private security guards were working the show, describing what they turned over as “just not good.” It was up to Live Nation Entertainment, the show’s promoter, to secure two mosh pits in front of the stage, Finner said.

Scott’s attorneys on Wednesday pointed to an operational plan for the event that states only the festival director and executive producers have the authority to stop the show, “neither of which is part of Travis’s crew.”

“Investigations should start proceeding over finger-pointing so that together, we can identify exactly what transpired and how we can prevent anything like this from happening again,” attorney Edwin F. McPherson said in a statement.