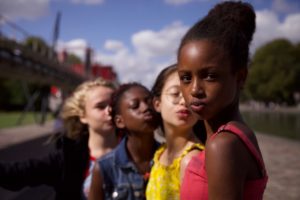 FILE – This image released by Netflix shows the cast of the coming-of-age film “Cuties.” The backlash to the French independent film “Mignonnes,” or “Cuties,” started before it had even been released because of a poster that went viral for its provocative depiction of its young female actors. (Netflix via AP, File)

The movie received backlash before its release because of a movie poster that went viral for its provocative depiction of its young female actors. The criticism continued after its release in September, including outrage from U.S. Sen. Ted Cruz of Texas and other politicians, who called for subscribers to #CancelNetflix.

The Tyler County grand jury handed down the indictment last month, The Texas Tribune reported. The court filing claims Netflix knowingly promoted work that “depicts the lewd exhibition of the genitals or pubic area of a clothed or partially clothed child.”

Netflix did not respond to the newspaper’s requests for comment.

But the streaming service has previously apologized for the movie poster and changed the plot summary that described the main character as becoming “fascinated with a twerking dance crew.”

The film, which won an award at the Sundance Film Festival, is about an 11-year-old Senegalese immigrant who joins a dance group. The film’s writer and director, Maïmouna Doucouré, has said “Cuties” is a critique of the hypersexualization of young girls.

Tyler County District Attorney Lucas Babin, said in a Tuesday press release that the county opted to indict Netflix for promoting the film there. Texas Rangers served a summons to Netflix last week, he added.

Lucas Babin is the son of U.S. Rep. Brian Babin, who has called the film child pornography.

“After hearing about the movie Cuties and watching it, I knew there was probable cause to believe it was criminal,” Lucas Babin said in the release. “If such material is distributed on a grand scale, isn’t the need to prosecute more, not less?”

Thomas Leatherbury, director of the First Amendment clinic at Southern Methodist University, called the indictment an “unusual test case” and said it’s “troubling” when there is a “criminal charge related to First Amendment activity, particularly expressive activity, like a movie.”

In Texas, a company convicted of a felony can be fined up to $20,000, according to the penal code. If the court finds that the company benefited financially from a crime, penalties can increase to twice the amount earned.

Shannon Edmonds, director of governmental relations for the Texas District and County Attorneys Association, said it’s unclear, if a court determined Netflix made money off a crime, whether that would mean the fine could double the amount of money earned in Tyler County or worldwide.