“As members of the law enforcement community, we write in recognition of Judge Jackson’s strong, effective and long-standing role in criminal justice issues,” wrote 63 officials from around the country. 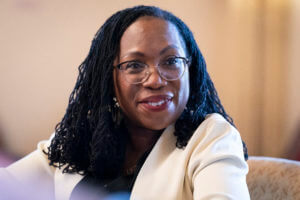 Jackson would be the first Black woman named to the nation’s highest court. She was nominated last month by President Joe Biden to fill the seat of Justice Stephen Breyer, who is retiring. She began courting lawmakers last week, meeting privately with Republicans and Democrats. She will meet with more lawmakers Tuesday.

It’s unusual for police officials to engage so specifically in politics. Those named in the letter represent the nation’s biggest and busiest police departments and courts. The signers to the letter — addressed to the chairman and ranking member of the Senate Judiciary Committee — include former New York Police Department Commissioner Bill Bratton and former NYPD official Ben Tucker, who just retired as highest-ranking Black official in the nation’s largest department.

The letter cites Jackson’s history with law enforcement. Growing up in Miami, her uncle was the city’s police chief and another uncle was a sex crimes detective. Her father was an attorney.

“Such direct familiarity with the experiences and challenges of law enforcement enriches her understanding of criminal justice issues,” the letter states.

Jackson has also worked as a federal public defender and for the U.S. Sentencing Commission as well as the federal judiciary, and has been praised by defense attorney groups.

Senate Democrats concerned about their narrow 50-50 majority — Vice President Kamala Harris breaks the tie — said the hearings will begin March 21. With a goal of an April confirmation, they are using Justice Amy Coney Barrett’s quick confirmation ahead of the 2020 presidential election as a model for Jackson.

Jackson has also won the support of the Fraternal Order of Police, the largest law enforcement labor organization in the United States, with more than 356,000 members. President Patrick Yoes said the union was “reassured” by her record and history and “should she be confirmed, she would approach her future cases with an open mind and treat issues related to law enforcement fairly and justly.”