WASHINGTON (AP) — In a whirlwind defense, Donald Trump’s impeachment attorneys aired a litany of grievances Friday, arguing the former president bore no responsibility for the deadly attack on the U.S. Capitol while accusing Democrats of “hatred” and “hypocrisy.”

The defense team, which wrapped up its arguments in just over three hours, said Trump was engaged in “constitutionally protected speech” when he spoke at a rally that immediately preceded the violence on Jan. 6 that left five dead. 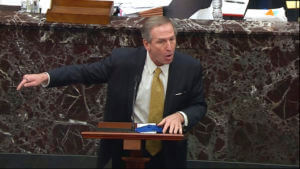 Echoing themes often heard in conservative media, they called the impeachment trial a “witch hunt” and accused Democrats of elevating a destructive “cancel culture” to the halls of Congress. They also suggested Democrats were hypocrites for impeaching Trump after some had previously voiced support for racial justice marches last summer, some of which turned violent.

“It has become very clear that House Democrats hate Donald Trump,” said Michael van der Veen, a Philadelphia personal injury attorney who is part of Trump’s defense team. “Hatred is at the heart.”

Here are some highlights from Friday’s impeachment proceedings:

Regardless of what occurred after Trump’s Jan. 6 speech, the former president was simply exercising his First Amendment right to free speech and can’t be found at fault, his attorneys argued.

Nearly 150 constitutional scholars disagree. In a letter signed last week they wrote that “the First Amendment does not apply in impeachment proceedings, so it cannot provide a defense for President Trump.”

The First Amendment has long been invoked as a powerful and compelling defense in court. But impeachment proceedings are an inherently political process that exists outside the U.S. court system in which senators sit as jurors.

Further, just because speech is protected by the Constitution doesn’t mean that there aren’t limits. Threats to commit a crime or “fighting words” that are likely to incite violence can be exceptions to protected speech.

Tempers flared during a question and answer session as impeachment proceedings stretched into the evening.

Sen. Bernie Sanders, a Vermont independent who caucuses with Democrats, tried to pressure Trump’s attorneys to say whether the former president had lost the election – a reality Trump himself has refused to acknowledge.

“Are the prosecutors right when they claim that Trump was telling a big lie or in your judgment, did Trump actually win the election?” Sanders asked in a written inquiry.

“No, it isnt!” Sanders angrily shot back from his desk, adding: “You represent the president of the United States!”

Separately, van der Veen at one point complained that the impeachment trial was his “worst experience in Washington.”

“You should have been here on Jan. 6.,” lead prosecutor Rep. Jamie Raskin, D-Md., dryly noted.

The articles of impeachment charge Trump with the “incitement of an insurrection,” a word that Webster’s Dictionary defines as “an act or instance of revolting against civil authority or an established government.”

Trump’s lawyers say that’s not technically correct. And they offered some alternative facts to make their point.

“’Insurrection’ is a term of art,” said attorney Bruce Castor, and it “involves taking over a country” or “a shadow government taking the TV stations over and having some plan on what you’re going to do when you finally take power.”

“Clearly this is not that,” he added.

In any event, Trump still wasn’t responsible for what happened after his speech, Castor said.

Trump’s speech, in which he urged his supporters to “fight like hell,“ was actual a call for the “peaceful exercise of every American’s first amendment rights to peacefully assemble and petition their government for redress of grievances,” according to Castor.

And he suggested that Trump wasn’t literally calling on his supporters to “fight,” but rather get involved in the political process, like supporting primary challengers of elected officials they did not like.

Many of Trump’s supporters who participated in the attack found far different meaning in the former president’s words on Jan. 6.

They have said in media interviews, videos taken at the scene and in statements to law enforcement that they were acting on Trump’s orders and aimed to overturn the outcome of the election by stopping Congress from certifying President Joe Biden’s Electoral College victory — the definition of an insurrection.

Donald Trump’s defense team attempted to undermine a key Democratic argument: that the former president incited the attack on the Capitol by urging his supporters to “fight like hell” and “go by very different rules” or they “wouldn’t have a country anymore.”

To do so, they played a lengthy montage of video clips during Friday’s proceedings, which featured President Joe Biden and other prominent Democrats repeatedly uttering the word “fight” during public speeches.

“There is a fight in front of us,” Vice President Kamala Harris said in one clip from November 2019. Another showed Biden talking about taking Trump “behind the gym” to “beat the hell out of him,” like in high school.

The use of the words “fight” or “fighting” is exceedingly common in political speech. The effort by Trump’s legal team amounted amounted to an effort to muddy the waters by drawing an equivalence and ignoring his false claims about voter fraud.

Trump used the word “fight” while trying to undermine the outcome of a free and fair election that he lost. And his use of the word on Jan. 6 came after weeks of baselessly claiming the election was being stolen from him.

There was no widespread fraud in the election, as has been confirmed by election officials across the country and former Attorney General William Barr. Dozens of legal challenges to the election put forth by Trump and his allies were dismissed.

Still, Trump’s lawyers said they were making a valid point by highlighting Democrats’ use of the word “fight.”

“This is not whataboutism,” said Michael van der Veen. “I am showing you this to make the point that all political speech must be protected.”

Though initially stone-faced and impassionate, as the minutes ticked by some reacted, particularly after their own turn on the screen.

Some giggled, others gasped. Some raised their hands or shrugged.

Minnesota Sen. Amy Klobuchar rolled her eyes. Elizabeth Warren of Massachusetts fidgeted with a pen during a lengthy section devoted to her. But Sanders, of Vermont, was visibly annoyed.

It “feels like they are erecting straw men to then take them down rather deal with the fact the events (on Jan. 6) happened,” said Sen. Michael Bennet, D-Colo.