MINNEAPOLIS (AP) — The trial of a former Minneapolis police officer in George Floyd’s death is expected to turn toward the officer’s training on Monday after a first week that was dominated by emotional testimony from eyewitnesses and devastating video of Floyd’s arrest.

Derek Chauvin, 45, is charged with murder and manslaughter in the May 25 death of Floyd. Chauvin, who is white, is accused of pinning his knee on the 46-year-old Black man’s neck for 9 minutes, 29 seconds as Floyd lay face-down in handcuffs outside of a corner market.

Prosecutors say Chauvin’s knee killed Floyd. The defense argues that Chauvin did what he was trained to do and that Floyd’s use of drugs and underlying health conditions caused his death.

Floyd’s treatment by police was captured on widely seen bystander video that soon sparked protests that rocked Minneapolis and quickly spread to other U.S. cities and beyond. The video, plus officers’ body-camera video and previously unseen bystander footage, was a heavy component of the first week of the trial, reawakening traumatic memories for viewers of the livestreamed trial.

Police Chief Medaria Arradondo is expected to testify during the trial’s second week, perhaps as early as Monday. Arradondo, the city’s first Black chief, fired Chauvin and three other officers the day after Floyd’s death, and in June called it “murder.”

“Mr. George Floyd’s tragic death was not due to a lack of training — the training was there,” Arradondo said then. “Chauvin knew what he was doing.”

The city moved soon after Floyd’s death to ban police chokeholds and neck restraints. Arradondo and Mayor Jacob Frey have also made several policy changes, including expanding requirements for reporting use-of-force incidents and documenting their attempts to de-escalate situations even when force isn’t used.

Prosecutors have already called supervisory officers to build the case that Chauvin improperly restrained Floyd. A duty sergeant and a lieutenant who leads the homicide division both questioned Chauvin’s actions in pinning Floyd after officers responded to a report that Floyd had passed a counterfeit $20 bill.

“Totally unnecessary,” Lt. Richard Zimmerman, the longest-tenured officer on the force, testified Friday. He said once Floyd was handcuffed, he saw “no reason for why the officers felt they were in danger, if that’s what they felt, and that’s what they would have to feel to be able to use that kind of force.” 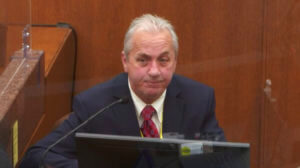 In this image from video, witness Lt. Richard Zimmerman of the Minneapolis Police Department, testifies as Hennepin County Judge Peter Cahill presides Friday, April 2, 2021, in the trial of former Minneapolis police Officer Derek Chauvin at the Hennepin County Courthouse in Minneapolis, Minn. Chauvin is charged in the May 25, 2020 death of George Floyd. (Court TV)

Zimmerman, who joined the department in 1985, said he has never been trained to kneel on someone’s neck if their hands are cuffed behind their back and they are in the prone position. Officers are supposed to get a person out of the position as soon as possible because it restricts their breathing, he said.

Instead, officers continued to restrain Floyd until an ambulance arrived — even after he became unresponsive.

Chauvin attorney Eric Nelson peppered Zimmerman with questions about the threat a handcuffed suspect might still pose, as well as whether handcuffs might fail. Nelson has also suggested that bystanders shouting at police might have distracted them from Floyd and made them feel threatened.

Jurors heard several days of testimony from those bystanders, several choking up as they recalled feeling powerless to help Floyd and guilt over his death.

Genevieve Hansen, an off-duty firefighter who came on the scene as she was out for a walk, said she immediately recognized Floyd was in trouble and tried to offer help. Instead, Officer Tou Thao ordered her to stay on the sidewalk. Hansen, who was mostly stoic while testifying, was overcome as she recalled her frustration.

“There was a man being killed,” she said. “I would have been able to provide medical attention to the best of my abilities. And this human was denied that right.”