CHICAGO (AP) — It stands as one of Chicago’s most horrific crimes, in large part because of small details that are impossible to shake: The promise of a juice box that lured the 9-year-old boy off a playground and into an alley, and the basketball he dropped when he was shot and killed there. 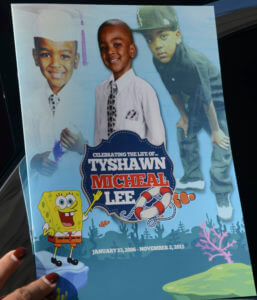 In this Tuesday, Nov. 10, 2015, file photo, a mourner holds the program for the funeral of 9-year-old Tyshawn Lee at St. Sabina Church in Chicago. (Brian Jackson/Chicago Sun-Times via AP, File)

Jury selection will begin Friday in the murder trial of two of three men charged with carrying out the November 2015 attack on Tyshawn Lee, a smart fourth-grader who prosecutors say was killed by gang members to send a message to his father, a purported member of a rival gang.

“It was one of the most evil things I’ve ever seen,” said the Rev. Michael Pfleger, a Roman Catholic priest who presided over the boy’s funeral Mass. “I was over there and to see a young boy laying in an alley next to a garbage can with his basketball a few feet away, this assassination of a 9-year-old child took violence in Chicago to a new low.”

Dwright Boone-Doty, who will represent himself, and Corey Morgan will be tried together but before separate juries, each of which will only consider the evidence as it pertains to one of the defendants. The third man accused in the attack, the alleged getaway driver Kevin Edwards, pleaded guilty to first-degree murder in exchange for a 25-year prison sentence. 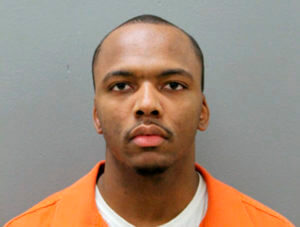 The story that prosecutors will tell at the trial is at once unimaginable and all too familiar in pockets of Chicago that have been plagued by gang warfare for years: The shooting was the result of a feud between the defendants’ Bang Bang Gang/Terror Dome faction of the Black P Stones and the Killa Ward faction of the Black Gangster Disciples, which the slain boy’s father, Pierre Stokes, allegedly belonged to.

According to prosecutors, Boone-Doty and Morgan believed that Stokes’ faction was responsible for an October 2015 shooting that killed Morgan’s 25-year-old brother, Tracey Morgan, and wounded his mother. That his mother was shot may have been even more significant to Corey Morgan than the killing of his brother, who was in the same faction, as it was a breach of gang etiquette that led Corey Morgan to seek revenge on the innocent family members of his rivals, prosecutors allege.

What happened next followed the deadly playbook of so many Chicago shootings. A few days after Morgan’s brother was killed, Boone-Doty allegedly fired into a car occupied by a rival gang member. As happens in so many of these shootings, the rival survived his injuries but the woman who was sitting beside him, 19-year-old Brianna Jenkins, was killed. Boone-Doty has pleaded not guilty in that attack. 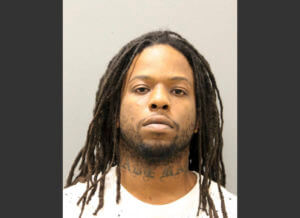 Prosecutors say the defendants then turned their attention to getting back at Stokes, first plotting to kill Tyshawn’s grandmother before settling on Tyshawn. And they wanted no leave no doubt about their message.

“His original plan was to torture this child by kidnapping and cutting off his fingers and ears,” then-State’s Attorney Anita Alvarez said of Boone-Doty shortly after he and Morgan were arrested.

Instead, prosecutors say Edwards drove Boone-Doty and Morgan to Dawes Park on the city’s South Side on the afternoon of Nov. 2, 2015, and waited with Morgan in the SUV while Boone-Doty approached the boy, struck up a conversation, dribbled his basketball, offered to buy him a juice box and then led him to the alley, where he shot him several times at close range.

When Tyshawn was found, part of the story of his final moments of life was one small thing that wasn’t there: a piece of one of his thumbs that was shot off when he raised his little hands to block the bullets.

As the investigation unfolded, police said they couldn’t believe what they were finding out, from a rap song that Boone-Doty was allegedly writing about the shooting to his jokingly referring to Tyshawn as ‘Shorty’ when he allegedly told friends what had happened: “Shorty couldn’t take it no more.” 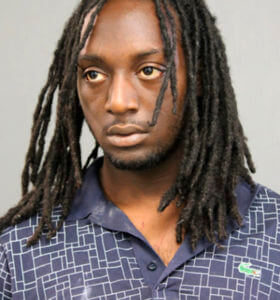 “This was something we didn’t even think humanly possible for even hardened gang members,” said John Escalante, who was the interim police superintendent when Boone-Doty was charged four months after the attack and who has since left the department.

On the day Boone-Doty first appeared in court accused of killing Tyshawn, the boy’s father, Stokes, opened fire on gang rivals, wounding three of them, authorities say. Stokes is in jail awaiting trial on aggravated battery and other charges in that attack.

“Mr. Stokes, who was involved in a gang lifestyle, ultimately suffered an unspeakable loss with the calculated execution of his son,” police spokesman Anthony Guglielmi said at the time. “Despite this, he continued to engage in the same gang activity that started this initial cycle of violence.”