COLUMBIA, S.C. (AP) — Donald Trump is adding another South Carolina attorney to his impeachment legal team, according to a trial lawyer group in the state. 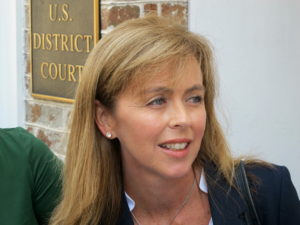 FILE – In this April 29, 2016, file photo, attorney Debbie Barbier speaks to reporters outside the federal courthouse in Charleston, S.C. Barbier had been hired to join Butch Bowers in crafting a defense for former President Donald Trump’s unprecedented second impeachment trial, set for the week of Feb. 8, 2021. (AP Photo/Bruce Smith, File)

In an email sent to South Carolina members of the American College of Trial Lawyers, group chairman Wallace Lightsey wrote that Deborah Barbier — a former federal prosecutor-turned-defense attorney who specializes in white-collar crime — had been hired to join Butch Bowers in crafting a defense for Trump’s unprecedented second impeachment trial, set for the week of Feb. 8.

“Regardless of one’s personal view of Mr. Trump, it says a great deal about Debbie’s skill and reputation as a trial lawyer that she was chosen for this task,” Lightsey wrote in the email, obtained by The Associated Press. “We know you will acquit yourself well (even though some of us may be hoping that your client is not).”

In Barbier, Bowers — an ethics and election lawyer picked last week to lead the team — has a co-counsel who spent more than a decade as a federal prosecutor and who now, in private practice, specializes in white-collar defense. Barbier, a graduate of the University of South Carolina School of Law, was an assistant U.S. Attorney in South Carolina for 15 years, working on both criminal and civil cases and ultimately serving as chief of the civil division.

After leaving the office in 2012, Barbier went into private practice. Her clients have included Republican political consultant Richard Quinn, who had at times counted former President Ronald Reagan and Sens. John McCain and Lindsey Graham among his clients. Conspiracy and illegal lobbying charges in connection with a wide-ranging legislative corruption probe were dropped in 2017 when Quinn’s son, then-state Rep. Rick Quinn, agreed to plead guilty to misconduct in office and resign.

Barbier also in 2016 served as defense attorney for a friend of the man convicted of shooting nine Black parishioners to death at a historic Charleston church. Joey Meek, Barbier’s client, was later sentenced to more than two years in prison for telling people not to share the shooter’s identity with authorities.

Barbier was hired by South Carolina’s state-owned utility company as a federal grand jury probed a multi-billion dollar nuclear project that failed, amid allegations the utility and a co-owner knew the project was doomed and lied to ratepayers.

She has both defended and prosecuted sheriffs in the state accused of wrongdoing in office.

Barbier joins Bowers, a Columbia attorney with years of experience representing elected officials and political candidates, including former South Carolina Gov. Mark Sanford. Bowers represented Sanford when state lawmakers mulled impeaching the governor after revelations Sanford had disappeared from the state, leaving no chain of command for five days, to see his lover in Argentina in 2009. The effort never made it out of committee.

Bowers also successfully guided another former governor, Nikki Haley, through an investigation into whether she had violated the state ethics law. 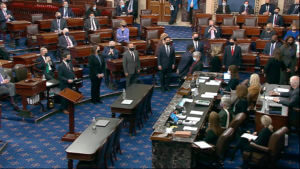 In part on the advice of Graham, the South Carolina senator, Trump is turning to Bowers and Barbier after other legal allies passed on the case. That’s a notable departure from his 2020 impeachment trial, when Trump had a stable of nationally-known attorneys, including Alan Dershowitz, Jay Sekulow and Kenneth Starr.

The House officially transmitted the article of impeachment — accusing Trump of inciting the mob that rampaged through the U.S. Capitol on Jan. 6 — to the Senate on Monday night. The trial could have officially begun Tuesday, but Republicans pushed to delay it to give Trump a chance to organize his legal team and prepare a defense.

If convicted, Trump could be barred from holding public office again, ending any hopes of mounting another White House bid in 2024.