MIAMI (AP) — Former Trump adviser Paul Manafort was removed from a plane at Miami International Airport before it took off for Dubai because he carried a revoked passport, officials said Wednesday.

Miami-Dade Police Detective Alvaro Zabaleta confirmed that Manafort was removed from the Emirates Airline flight without incident Sunday night but directed further questions to U.S. Customs and Border Protection. That agency did not immediately respond to an email Wednesday seeking comment. 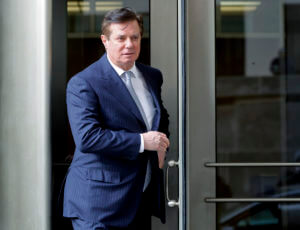 A lawyer who has represented Manafort did not immediately return a call and email seeking comment Wednesday.

Manafort, 72, led former President Donald Trump’s campaign for several months during the 2016 presidential race but was ousted in August of that year after revelations about his business dealings in Ukraine.

He was later indicted on a broad array of financial crimes as part of special counsel Robert Mueller’s investigation into ties between the Trump campaign and Russia. He was convicted by a jury in August 2018 and later pleaded guilty in federal court in Washington.

In May 2020, Manafort was released from a low-security prison where he was serving a more than seven-year federal sentence amid concerns about the coronavirus. Although Manafort had not served long enough to be eligible for release under the guidelines, the Bureau of Prisons decided to free him because of his age and health vulnerabilities, a person familiar with the matter has said. Trump pardoned Manafort in December 2020.

Manafort’s removal was first reported by the website Knewz.com.
___
The name of U.S. Customs and Border Protection has been corrected in this story.