WASHINGTON (AP) — Lawyers for Donald Trump opened his impeachment defense Friday by strenuously denying he played any role in inciting the deadly riot at the U.S. Capitol, blasting the case against him as politically motivated “hatred” and part of a yearslong Democratic “witch hunt.” 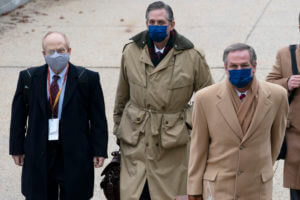 From left, David Schoen, Bruce Castor and Michael van der Veen, lawyers for former President Donald Trump, arrive at the Capitol on the third day of the second impeachment trial of Trump in the Senate, Thursday, Feb. 11, 2021, in Washington. (AP Photo/Jose Luis Magana)

Lawyers for the former president told senators that Trump was entitled to dispute the 2020 election results and that his doing so, including in a speech that preceded the assault on the Capitol, did not amount to inciting the violence that followed. They sought to turn the tables on prosecutors by likening the Democrats’ questioning of the legitimacy of Trump’s 2016 win to his challenge of his election loss. When Trump implored supporters to “fight like hell” on Jan. 6, they said, that was no different from the Democrats’ own charged rhetoric that risks precipitating violence.

“This is ordinarily political rhetoric that is virtually indistinguishable from the language that has been used by people across the political spectrum for hundreds of years,” said Michael van der Veen, one of Trump’s lawyers. “Countless politicians have spoken of fighting for our principles.”

After a prosecution case rooted in emotive, violent images from the Capitol siege, the impeachment trial shifted to defense lawyers who made a fundamental concession: The violence was every bit as traumatic, unacceptable and illegal as Democrats say — but Trump did not order it. Van der Veen said the siege was carried out by people who had “hijacked” for their own purposes what was supposed to be a peaceful event and had made plans for violence before Trump had even spoken.

“You can’t incite what was going to happen,” he said.

Acknowledging the horrors of the January day is meant to blunt the visceral impact of the House Democrats’ case and quickly pivot to what Trump’s defenders see as the core — and more winnable — issue of the trial: Whether Trump can be held responsible for inciting the deadly Jan. 6 riot.

The argument is likely to appeal to Republican senators who want to be seen as condemning the violence but without convicting the president. 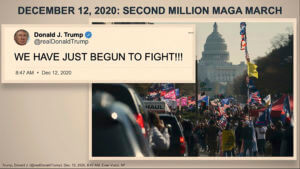 This image from video shows a slide presented by Democrats prosecuting the impeachment of former President Donald Trump in the Senate at the U.S. Capitol in Washington, Wednesday, Feb. 10, 2021. The slide shows a photo of President Trump’s motorcade driving by a group of his supporters participating in a rally in Washington on Nov. 14, 2020, juxtaposed with a tweet from Trump on Dec. 12, 2020, declaring the “fight” had just begun. It was one of many images, videos and quotes used by prosecutors as they sought to make the case that the president had incited a mob of supporters to insurrection on Jan. 6, 2021. (Senate Television via AP)

“They haven’t in any way tied it to Trump,” David Schoen, one of the president’s lawyers, told reporters near the end of two full days of Democrats’ arguments aimed at doing just that.

He previewed the essence of his argument Tuesday, telling the Senate jurors: “They don’t need to show you movies to show you that the riot happened here. We will stipulate that it happened, and you know all about it.”

In both legal filings and in arguments this week, Trump’s lawyers have made clear their position that the people responsible for the riot are the ones who actually stormed the building and who are now being prosecuted by the Justice Department.

Anticipating defense efforts to disentangle Trump’s rhetoric from the rioters’ actions, the impeachment managers spent days trying to fuse them together through a reconstruction of never-been-seen video footage alongside clips of the president’s monthslong urging of his supporters to undo the election results.

Democrats, who concluded their case Thursday, used the rioters’ own videos and words from Jan. 6 to try to pin responsibility on Trump. “We were invited here,” said one Capitol invader. “Trump sent us,” said another. “He’ll be happy. We’re fighting for Trump.”

The prosecutors’ goal was to cast Trump not as a bystander but rather as the “inciter in chief” who spread election falsehoods, then encouraged supporters to come challenge the results in Washington and fanned the discontent with rhetoric about fighting and taking back the country.

The Democrats also are demanding that he be barred from holding future federal office.

“This attack never would have happened but for Donald Trump,” Rep. Madeleine Dean, one of the impeachment managers, said Thursday as she choked back emotion. “And so they came, draped in Trump’s flag, and used our flag, the American flag, to batter and to bludgeon.”

For all the significance the impeachment of a president is meant to convey, this historic second trial of Trump could wrap up with a vote by this weekend, particularly since Trump’s lawyers focused on legal rather than emotional or historic questions and are hoping to get it all behind him as quickly as possible.

With little hope of conviction by the required two-thirds of the Senate, Democrats delivered a graphic case to the American public, describing in stark, personal terms the terror faced that day — some of it in the very Senate chamber where senators are sitting as jurors. They used security video of rioters searching menacingly for House Speaker Nancy Pelosi and Vice President Mike Pence, smashing into the building and engaging in bloody, hand-to-hand combat with police.

They displayed the many public and explicit instructions Trump gave his supporters — long before the White House rally that unleashed the deadly Capitol attack as Congress was certifying Democrat Joe Biden’s victory. Five people died in the chaos and its aftermath.

“What makes you think the nightmare with Donald Trump and his law-breaking and violent mobs is over?” asked Rep. Jamie Raskin, D-Md., the lead prosecutor. He said earlier, “When Donald Trump tells the crowd, as he did on Jan. 6, ‘Fight like hell, or you won’t have a country anymore,’ he meant for them to ‘fight like hell.’”

At the White House, Biden said he believed “some minds may be changed” after senators saw the security video, though he had previously acknowledged that conviction was unlikely. By Thursday, many seemed prepared to move on.

“I thought today was very repetitive, actually. I mean, not much new. I was really disappointed that they didn’t engage much with the legal standards,” said Republican Sen. Josh Hawley of Missouri.

Several Republican senators, including Ted Cruz of Texas and Mike Lee of Utah, conferred Thursday with Trump’s lawyers. Cruz told reporters that the senators were discussing legal strategy — something that would never be permissible in a criminal case. There’s no rule against the Senate jurors strategizing with the lawyers in an impeachment trial, though Democrats can use it to raise questions about impartiality.

The presentation by Trump’s lawyers is low-risk in one sense given the likelihood of acquittal. But it is also being closely watched because of an uneven performance on Tuesday when one defense lawyer, Bruce Castor, gave such meandering arguments that Trump raged from his home in Florida.

They are highlighting different parts of the same speech focused on by prosecutors, when Trump told supporters assembled at the Ellipse outside the White House to “fight like hell.” 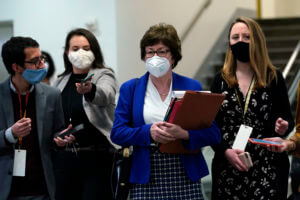 Sen. Susan Collins, R-Maine, is followed by reporters as she walks on Capitol Hill in Washington, Thursday, Feb. 11, 2021, after the third day of the second impeachment trial of former President Donald Trump. (AP Photo/Susan Walsh)

They note that Trump in the same speech encouraged the crowd to behave “peacefully,” and they contend that his remarks — and his general distrust of the election results — are all protected under the First Amendment. Democrats strenuously resist that assertion, saying his words weren’t political speech but rather amounted to direct incitement of violence.

The defense lawyers also returned to arguments made Tuesday that the trial itself is unconstitutional because Trump is no longer in office. The Senate rejected that contention as it voted to proceed with the trial.

By Thursday, senators sitting through a second full day of arguments appeared somewhat fatigued, slouching in their chairs, crossing their arms and walking around to stretch.

One Republican, Sen. Jim Inhofe of Oklahoma, said during a break: “To me, they’re losing credibility the longer they talk.”

Republican Sen. Marco Rubio said the facts of Jan. 6, though “unpatriotic” and even “treasonous,” were not his chief concern. Rather, he said Thursday, an impeachment trial for someone no longer in office “sets a very dangerous precedent.” 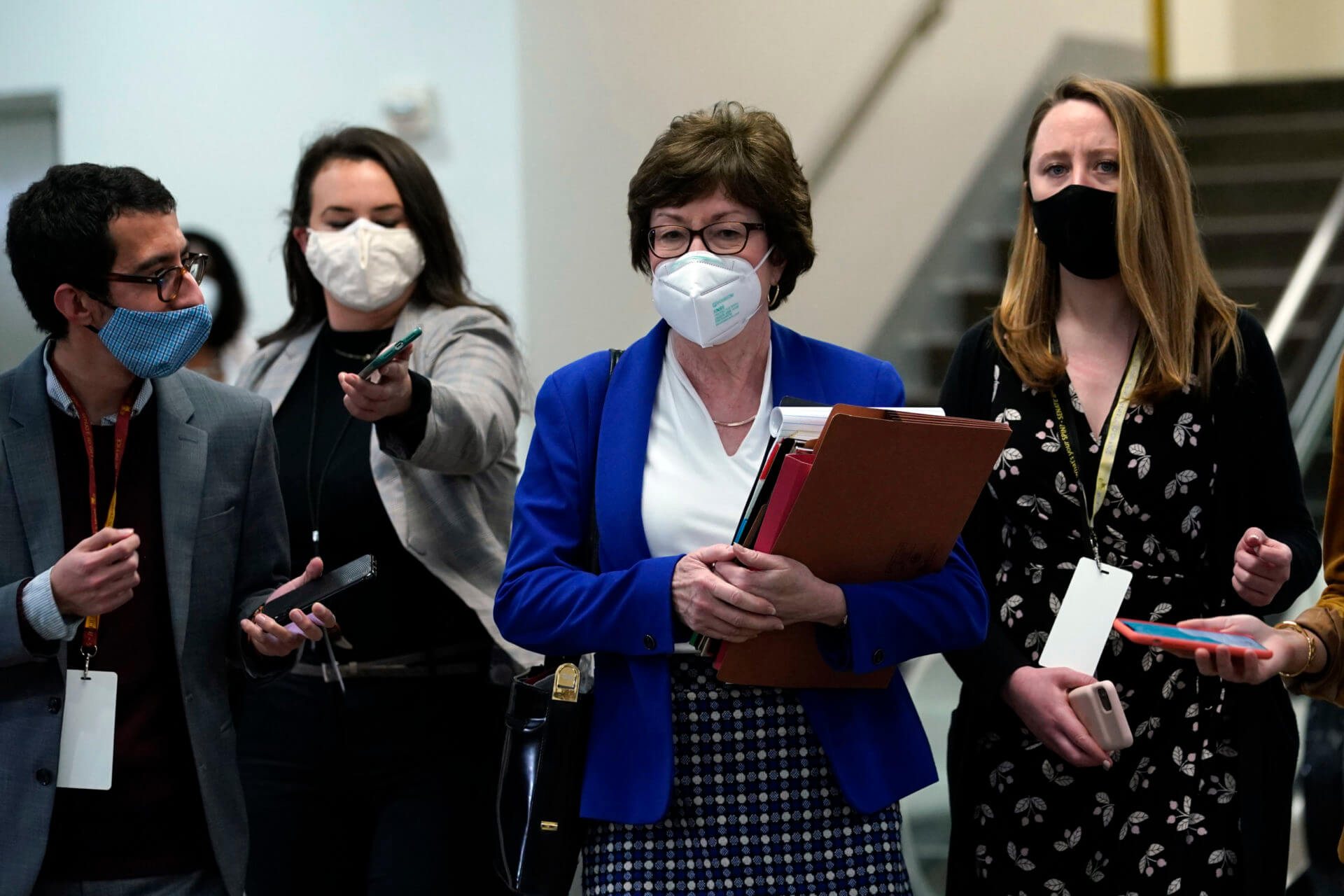