ATLANTA (AP) — A judge in Colorado on Tuesday ordered a legal adviser for former President Donald Trump’s campaign to travel to Georgia to testify before a special grand jury that’s looking into whether Trump and others illegally tried to influence the 2020 election in Georgia.

Judge Gregory Lammons in Fort Collins, Colorado, made the decision after holding a hearing on a request from Fulton County District Attorney Fani Willis to compel testimony from attorney Jenna Ellis. Prosecutors are interested in Ellis’s role in helping to coordinate and plan legislative hearings in Georgia and others states where false allegations of election fraud were pushed, according to testimony in court. 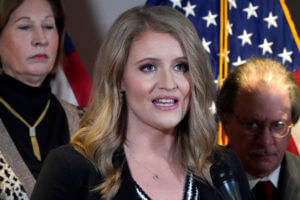 FILE – Jenna Ellis, a member of then-President Donald Trump’s legal team, speaks during a news conference at the Republican National Committee headquarters, Nov. 19, 2020, in Washington. A judge in Colorado on Tuesday, Aug. 16, 2022, ordered Ellis to travel to Georgia to testify before a special grand jury that’s looking into whether Trump and others illegally tried to influence the 2020 election in Georgia. (AP Photo/Jacquelyn Martin, File)

Fulton County prosecutors have purchased plane tickets and made a hotel reservation in preparation for Ellis to testify on Aug. 25.

The investigation, prompted by a January 2021 phone call between Trump and Georgia Secretary of State Brad Raffensperger, began early last year. During that call, Trump suggested Raffensperger could “find” the votes to overturn his narrow election loss in the state. It has become clear since the special grand jury was seated in May that the focus of the investigation extends well beyond that call.

Willis last month filed petitions with the judge overseeing the special grand jury seeking to compel testimony from seven Trump associates and advisers, including Ellis, U.S. Sen. Lindsey Graham of South Carolina, and former New York mayor and Trump attorney Rudy Giuliani. Because they don’t live in Georgia, she had to use a process that involves getting a judge in the state where they’re located to order them to appear before the special grand jury in Atlanta.

Giuliani, who’s been notified he’s a target of the investigation, is set to testify before the special grand jury on Wednesday. Graham’s subpoena orders him to testify on Aug. 23, but he has said he’ll appeal a judge’s Monday order declining to quash his subpoena.

In the petition seeking Ellis’s testimony, Willis identified her as “an attorney for the Trump Campaign’s legal efforts seeking to influence the results of the November 2020 election in Georgia and elsewhere.”

Ellis appeared with Giuliani at a Dec. 3, 2020, state Senate committee hearing at the Georgia Capitol during which false allegations of election fraud were made, Willis wrote. She also wrote at least two legal memos to Trump and his attorneys advising that then-Vice President Mike Pence should “disregard certified electoral college votes from Georgia and other purportedly ‘contested’ states” when Congress met to certify the election results on Jan. 6, 2021, the petition says.

Evidence shows that Ellis’s actions were “part of a multi-state, coordinated plan by the Trump Campaign to influence the results of the November 2020 election in Georgia and elsewhere,” Willis wrote.

Fulton County Superior Court Judge Robert McBurney, who’s overseeing the special grand jury, signed off on Willis’s petitions to order Ellis and other Trump associates to testify. He issued so-called certificates of material witness stating that they are “necessary and material” witnesses for the special grand jury investigation.

Lammons, the Colorado judge, heard arguments from Ellis’s lawyer, Michael Melito, and prosecutor Dawn Downs, with the Larimer County district attorney’s office in Colorado, in a hearing that was streamed online. Fulton County Deputy District Attorney Will Wooten appeared by video conference from Atlanta as a witness to testify why Ellis’s appearance is necessary.

Lammons found that there is enough evidence that Ellis is a material witness and there is no evidence that traveling to Atlanta for one day of testimony would be an undue burden. He said any issues of attorney-client privilege that Ellis may wish to raise should be addressed by McBurney, the judge in Georgia.

The special grand jury operates in secret and does not have the power to issue an indictment. Once its investigation is complete, it will issue a report with recommendations. Willis will then have to decide whether to go to a regular grand jury to seek an indictment.