WASHINGTON (AP) — Lawyers for former President Donald Trump asked a federal judge Monday to halt the FBI’s review of documents recovered from his Florida estate earlier this month until a neutral special master can be appointed to inspect the records.

The request was included in a federal lawsuit, the first filing by Trump’s legal team in the two weeks since the search, that takes broad aim at the FBI investigation into the discovery of classified records at Mar-a-Lago and that foreshadows arguments his lawyers are expected to make as the probe proceeds. 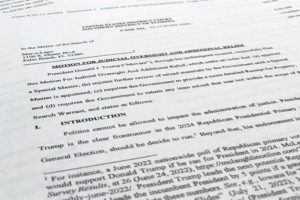 A court filing by lawyers for former President Donald Trump is photographed Monday, Aug. 22, 2022, as lawyers ask a federal judge to prevent the FBI from continuing to review documents recovered from his Florida estate until a neutral special master can be appointed. The attorneys asserted in a court filing, their first since the FBI search of Mar-a-Lago two weeks ago, that the sets of documents taken from the residence were “presumptively” covered by executive privilege. (AP Photo/Jon Elswick)

It comes as The New York Times reported that the government has recovered more than 300 documents marked classified from Mar-a-Lago since Trump left office, including more than 150 retrieved by the National Archives in January — a number that helped trigger the criminal investigation.

The lawsuit casts the Aug. 8 search, in which the FBI said it recovered 11 sets of classified documents from Mar-a-Lago, as a “shockingly aggressive move.” It also attacks the warrant as overly broad, contends that Trump is entitled to a more detailed description of the records seized from the home and argues that the FBI and Justice Department has long treated him “unfairly.”

“Law enforcement is a shield that protects America. It cannot be used as a weapon for political purposes,” the lawyers wrote Monday. “Therefore, we seek judicial assistance in the aftermath of an unprecedented and unnecessary raid” at Mar-a-Lago.

In a separate statement, Trump said “ALL documents have been previously declassified” — though he has not produced evidence to support that claim — and described the records as having been “illegally seized from my home.” The Justice Department countered in a terse three-sentence statement pointing out that the search had been authorized by a federal judge after the FBI presented probable cause that a crime had been committed.

The filing requests the appointment of a special master not connected the case who would be tasked with inspecting the records recovered from Mar-a-Lago and setting aside those that are covered by executive privilege — a principle that permits presidents to withhold certain communications from public disclosure. 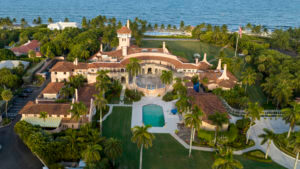 In some other high-profile cases — including investigations involving Rudy Giuliani and Michael Cohen, two of Trump’s personal attorneys — that role has been filled by a former judge.

“This matter has captured the attention of the American public. Merely ‘adequate’ safeguards are not acceptable when the matter at hand involves not only the constitutional rights of President Trump, but also the presumption of executive privilege,” the attorneys wrote.

The lawsuit argues that the records, created during Trump’s White House tenure, are “presumptively privileged.” But the Supreme Court has never determined whether a former president can assert executive privilege over documents, writing in January that the issue is unprecedented and raises “serious and substantial concerns.”

The high court turned down Trump’s plea to block records held by the National Archives from being turned over to the Jan. 6 committee, saying then that his request would have been denied even if he had been the incumbent president, so there was no need to tackle the thorny issue of a former president’s claims.

The lawsuit paints Trump as “fully cooperative” and compliant with investigators, saying members of his personal and household staff were made available for voluntary interviews and quoting him as telling FBI and Justice Department officials during a June visit to Mar-a-Lago, “Whatever you need, just let us know.”

But the chronology of events makes clear that the search took place only after other options to recover classified documents from the home had been incomplete or unsuccessful. In May, for instance, weeks before the search, the Justice Department issued a subpoena for records bearing classification markings.

The Trump team’s lawsuit was assigned to U.S. District Judge Aileen M. Cannon, who was nominated by Trump in 2020 and confirmed by the Senate 56-21 later that year. She is a former assistant U.S. attorney in Florida, handling mainly criminal appeals.

The months-long investigation, which burst into public view with the Mar-a-Lago search, emerged from a referral from the National Archives, which earlier this year retrieved 15 boxes of documents and other items from the estate that should have been turned over to the agency when Trump left the White House. An initial review of that material concluded that Trump had brought presidential records and several other documents that were marked classified to Mar-a-Lago.

FBI and Justice Department officials visited Mar-a-Lago in June and asked to inspect a storage room. Several weeks later, the Justice Department subpoenaed for video footage from surveillance cameras at the estate. After the meeting at Mar-a-Lago, investigators interviewed another witness who told them that there were likely additional classified documents still at the estate, according to a person familiar with the investigation who was not authorized to speak publicly about it.

Separately Monday, a federal judge acknowledged that redactions to an FBI affidavit spelling out the basis for the search might be so extensive as to make the document “meaningless” if released to the public. But he said he continued to believe it should not remain sealed in its entirety because of the “intense” public interest in the investigation.

A written order from U.S. Magistrate Judge Bruce Reinhart largely restates what he said in court last week, when he directed the Justice Department to propose redactions about the information in the affidavit that it wants to remain secret. That submission is due Thursday at noon.

Justice Department officials have sought to keep the entire document sealed, saying disclosing any portion of it risks compromising an ongoing criminal investigation, revealing information about witnesses and divulging investigative techniques. They have advised the judge that the necessary redactions to the affidavit would be so numerous that they would strip the document of any substantive information and make it effectively meaningless for the public.

Reinhart acknowledged that possibility in his Monday order, writing, “I cannot say at this point that partial redactions will be so extensive that they will result in a meaningless disclosure, but I may ultimately reach that conclusion after hearing further from the Government.” 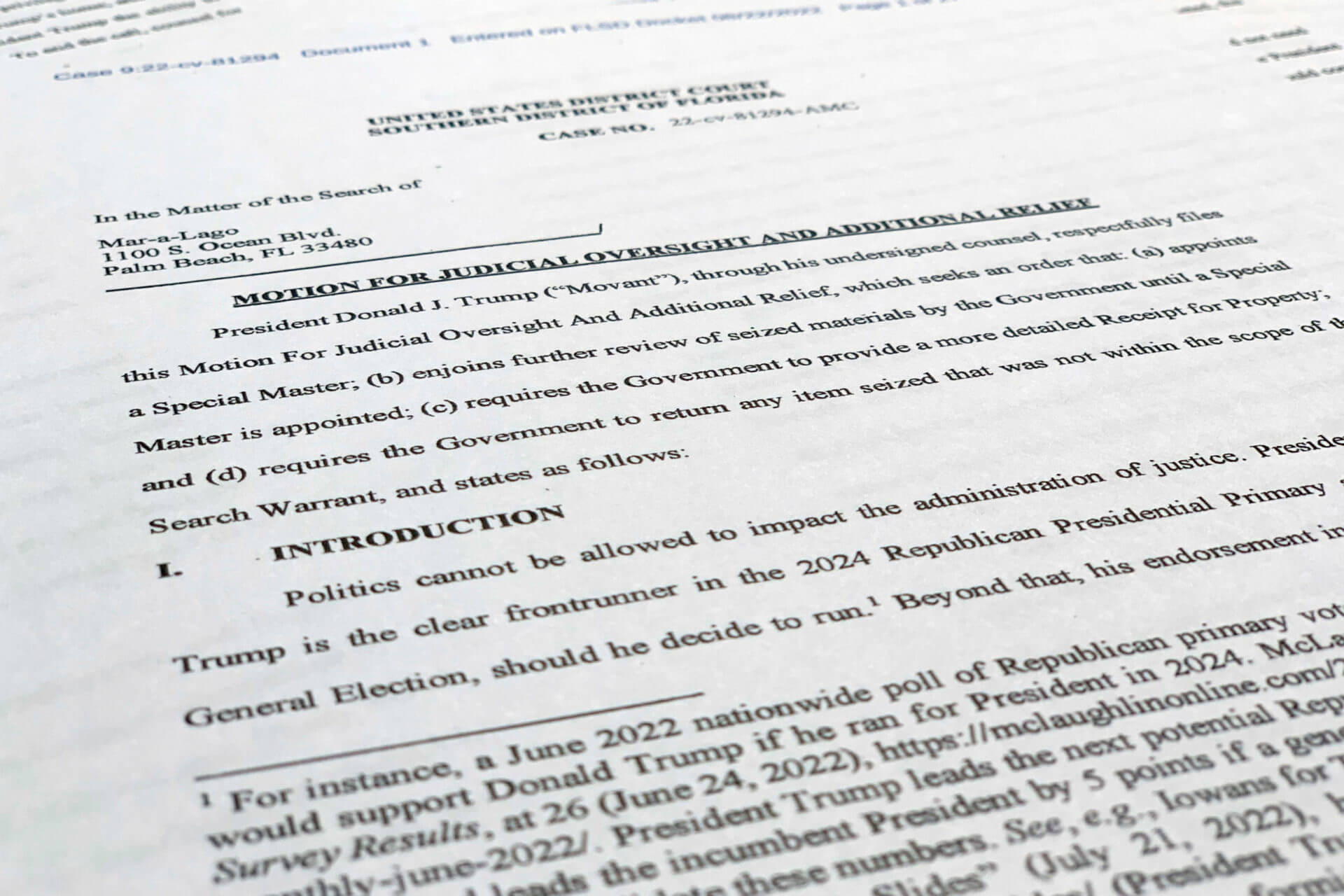 A court filing by lawyers for former President Donald Trump is photographed Monday, Aug. 22, 2022, as lawyers ask a federal judge to prevent the FBI from continuing to review documents recovered from his Florida estate until a neutral special master can be appointed. The attorneys asserted in a court filing, their first since the FBI search of Mar-a-Lago two weeks ago, that the sets of documents taken from the residence were "presumptively" covered by executive privilege. (AP Photo/Jon Elswick)
MORE NEWS