WASHINGTON (AP) — The Justice Department and lawyers for Donald Trump are at odds over whether the former president can assert executive privilege over documents seized from his Florida estate to shield them from investigators and over whether he can treat the records as his own personal belongings.

Dueling legal briefs unsealed Monday lay bare a continuing dispute over the status of thousands of records taken during an Aug. 8 FBI search of Mar-a-Lago. Justice Department investigators want broad access to the documents as they consider whether to bring charges for the retention of top-secret information at the Palm Beach property, but Trump’s lawyers are resisting that. 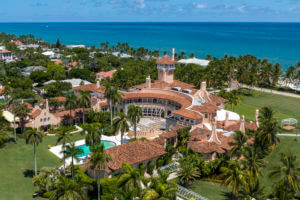 FILE – An aerial view of former President Donald Trump’s Mar-a-Lago club in Palm Beach, Fla., on Aug. 31, 2022. The Justice Department and lawyers for Donald Trump are at odds over whether the former president can assert executive privilege over documents seized from his Florida estate to shield them from investigators and over whether he can treat the records as his own personal belongings. (AP Photo/Steve Helber, File)

The disagreement is playing out before a veteran Brooklyn judge, Raymond Dearie, who was appointed to conduct his own review of the seized records and to resolve disputes between the two sides over claims of executive privilege and attorney-client privilege.

Both sides submitted written arguments on points of disagreement, including whether Trump could designate records created or received during his administration as personal records after leaving the White House and whether he could assert executive privilege to withhold certain documents from investigators

The Trump team argued in its filing that Trump exercised his authority under the Presidential Records Act to designate the records that were later seized from Mar-a-Lago as his own personal belongings. It says that once a president has designated a record as personal, “the inquiry ends regardless of the content of a given document.”

“President Trump was still serving his term in office when the documents at issue were packed, transported, and delivered to his residence in Palm Beach, Florida,” the Trump team wrote.

“Thus, when he made a designation decision, he was President of the United States; his decision to retain certain records as personal is entitled to deference, and the records in question are thus presumptively personal,” Trump’s lawyers wrote. 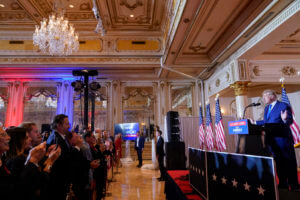 The Justice Department, for its part, accused the Trump team of “gamesmanship” and said that Trump was not entitled to claim as personal records documents that were clearly presidential. It also argued that Trump can not invoke executive privilege, a legal principle that permits the president to keep certain information secret to protect the confidentiality of presidential decision-making, as a way to now block the FBI from reviewing certain records.

The FBI seized roughly 13,000 documents during its search of Mar-a-Lago, including about 100 with classification markings. A federal appeals court in September lifted a judge’s hold on the Justice Department’s ability to use the classified documents as part of its criminal investigation, but department lawyers want to be able to review the unclassified records as well because they say they may contain evidence of a crime.