TUCSON, Ariz. (KGUN) — A Tucson couple was sentenced Friday for their parts in a 2019 murder.

On Friday, Blane Barksdale was sentenced to 22 years in prison — with almost three years of credit for time served.

Later Friday, Susan Barksdale was sentenced to 5 years in prison with 2.8 years credit for time served.

In 2019, Frank Bligh disappeared following a fire at his house. His body wasn’t located at the time, but police found his car. They ruled his death a homicide. 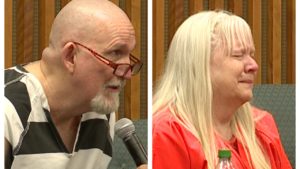 Before sentencing Friday Barksdale apologized to Frank Bligh’s brother Skip who was in court by audio link.

Barksdales continued to say, “I would also like to say I’m sorry to my family, my wife, her family. I don’t know, Mr. Bligh, if you knew Sue or not. She was very good friends with your brother. She’s not responsible for this. This was my actions, my actions alone.”

Part of Blane Barksdale’s plea agreement called for him to disclose where he put Frank Bligh’s remains. Tucson Police just released photos of the site in Gila County where Bligh was found late last year.

In November, Susan Barksdale pleaded guilty to manslaughter in connection with the disappearance of Bligh.

During sentencing Friday, Susan Barksdale’s attorney said she was influenced by fear of domestic violence from Blane. She told the judge Frank Bligh really was a dear friend.

Susan Barksdale will serve five years in prison for her guilty plea for manslaughter, minus the roughly three years she’s been in jail waiting for her case to wind up.

This story was originally published April 29, 2022 by KGUN in Tucson, an E.W. Scripps Company.