An Oklahoma prosecutor was recovering Wednesday at his home in Tulsa, one day after police said he was stabbed by his adult daughter.

“Unfortunately (Tuesday), I found myself in a situation that I hoped would never happen,” Tulsa County District Attorney Steve Kunzweiler, 60, said in a statement. “Fortunately, my injuries are such that I am able to go home.” 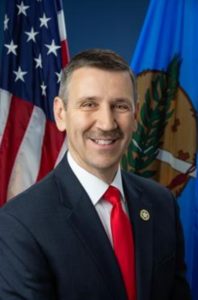 “Tulsa Police has criminal jurisdiction and will work this case like all other cases,” Franklin wrote.

Police Capt. Richard Meulenberg said Jennifer Kunzweiler was taken to a hospital after her arrest at the family home, where she also lived. She was treated for self-inflicted cuts sustained before she stabbed her father in the arm and midsection.

A motive for the stabbing remained under investigation, according to Meulenberg.

“We know there is some mental illness here,” Meulenberg said, “but we haven’t interviewed her” to question her about a motive.

Jennifer Kunzweiler remained hospitalized Wednesday and will likely face a charge of domestic violence with a dangerous weapon when released Meulenberg said.

Meulenberg said Tulsa police have no record of previous criminal contact with Jennifer Kunzweiler and online court records show no charges on her record.

Steve Kunzweiler, who was first elected district attorney in 2014 and won reelection in 2018, is unopposed for reelection in November.

The stabbing is the third of an elected official in Oklahoma in recent years.

Tulsa District Judge Sharon Holmes was wounded in a stabbing at her home by her adult daughter, Adrienne Smith, in 2019.

State Labor Commissioner Mark Costello was killed in a 2015 when he was stabbed in a restaurant parking lot in Oklahoma City by his adult son, Christian Costello, in 2015.