DENVER (AP) — A lawyer representing a television station security guard who shot and killed a demonstrator during opposing right- and left-leaning rallies this month told a judge Wednesday that there was “obvious evidence of self-defense.”

Public defender Valerie Cole also asked a judge during a brief court hearing to consider lowering Matthew Dolloff’s $500,000 bond so he could have a chance of being released from jail. Dolloff was charged with second-degree murder Monday.

Judge Shelley Gilman said she would leave a decision on bond to the judge who would be handling the case going forward.

Dolloff appeared by video from jail, where he has been held since shooting 49-year-old Lee Keltner on Oct. 10 while being paid by KUSA-TV to protect its staffers who were covering a “Patriot Muster” demonstration and a “BLM-Antifa Soup Drive” counterprotest.

He wore green scrubs and a surgical mask, answering “Yes, your honor” to questions from the judge about the legal process and his rights. 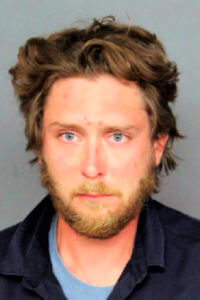 Video from bystanders, including the TV producer Dolloff was working with at the time, and photos from The Denver Post show Keltner — who attended the “Patriot Muster” rally, according to his family’s attorney — at first arguing with a Black man wearing a Black Guns Matter T-shirt before getting into an altercation with Dolloff. Cellphone video from the unnamed TV producer suggests Keltner was upset that the original argument was being recorded.

The video shows Keltner, holding a spray can, walking out of view. A man’s voice — it’s unclear if it’s Keltner — is heard saying the area was no place for cameras.

“Get the cameras out of here or I’m going to f— you up,” the unidentified man says. Keltner and Dolloff are then shown scuffling before the video stops.

Photos from the Post show Dolloff pointing his gun at Keltner as he fires what police said was pepper spray at Dolloff before Keltner falls to the ground.

When the TV producer resumes filming after the shooting, he tells arriving police that he is with the press and that the man who was shot “was going to get me.” He also says the security guard shot Keltner because Keltner used mace.