DENVER (KMGH) – Two people were taken into custody and a paintball gun was found by police after Northfield High School in Denver was placed on lockdown for about an hour Thursday morning after a report of a student with a gun.

The Denver Police Department said in a tweet just before 10:30 a.m. they were investigating “a report of a suspicious occurrence” and that there was a large police presence at the scene. 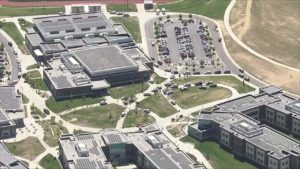 Northfield High School was placed on lockdown around 10 a.m. Thursday morning. A school official said in a social media post no firearms were discharged and no students were harmed to the person’s knowledge. (Denver7)

The high school said in another post at 10:52 a.m. the lockdown was cleared.

“Students and teachers will be released by classroom onto buses to the Northeast DPS bus terminal on Dallas St., just north of Northfield Blvd. Parents can reunite with their students there,” the district said in the post.

“All students were safe throughout this incident, nobody has harmed, and school will be closed for the remainder of the day,” the post added.

Denver police said just before noon the original report was of a student with a gun. The campus was locked down, and a search turned up a paintball gun.

Two suspects were taken into custody, at least one of them off campus, according to police.

Video sent to Denver7 from the scene showed two people being detained and escorted off the campus after the lockdown.

NORTHFIELD HS UPDATE — video just sent to me shows 2 people possibly in handcuffs being escorted off of the Northfield High School campus after an hour long lockdown this morning. A DPS spokesman said there was a report of a weapon on campus. Students are safe. @DenverChannel pic.twitter.com/9rUDNLLJZ4

At a news conference at noon, Denver Police Chief Paul Pazen said it was key that parents and families knew that all students at the campus were safe.

He said a student saw something suspicious and reported it to the campus security team at the school, who notified DPD. The department and other jurisdictions responded and took the two people into custody.

Pazen said officers will present charges to the district attorney’s office for the two people taken into custody. He said the incident happened on campus, but did not confirm where.

“We are confident we have the individuals involved in this situation and will be working with witnesses from the school,” Pazen said.

Denver Public Schools said Wednesday it would have extra police officers on hand for the rest of the school year, which ends next Friday, after the shooting in Texas.

“I think the entire world is aware of what happened in Texas,” Pazen said. “We are heartbroken as a community. We have this heightened sense of awareness.”

He said the student informed security about the gun at 9:19 a.m. and that plice officers arrived within three minutes.

Marrero praised the response by campus security and police for what he called an “incredible response time,” and added he was happy the gun threat did not involve a real weapon.

Alex, a parent whose daughter attends the high school, said he was not getting much in the way of communication from the district or police as he stood near the campus around 11 a.m. He said he and his daughter, and other parents, were getting more information from students from inside the school, and that everyone was tense.

“After what happened in Texas, and this keeps happening here, I believe it’s time for them to put in metal detectors,” Alex said. “Get more information for parents and for students.”

The school originally posted on Facebook around 10:15 a.m. and said the site of the incident “appears to be confined only to Building 3, the gym building, and law enforcement officers have been clearing students out of that building safely.”

“Given the strength of the law enforcement response, clearly DPD and DPS are taking this situation very seriously and doing a very professional job of handling this matter,” the school said in the Facebook post.

“If your student is not yet on campus, please keep them home,” the school said. “If they are here, keep in touch with them and reassure them that this incident is being handled with the utmost regard for safety. We are hoping it is a false alarm, but we definitely understand how terribly scary and anxiety-provoking it is, especially given recent events in Texas.”

According to DPS, there were 1,570 students enrolled at the school this year. According to the school, Thursday is the last day of school at the high school.

The situation comes two days after an 18-year-old shot and killed 19 students and two teachers at an elementary school in Uvalde, Texas. And it comes a day after a 14-year-old student from Boulder was arrested in connection with a school shooting threat at Casey Middle School in Boulder that was made Tuesday regarding celebrations planned for Thursday, according to Boulder police.

And at the Skyview Campus in Adams County, the schools went into secure status while deputies pulled over a suspect who was speeding and who allegedly waved a gun at a person who was dropping her kids off at school near Monterey Elementary, the ADams County Sheriff’s Office said. The man was arrested, and no students were in danger, the sheriff’s office said.

This story was originally published May 26, 2022 by KMGH in Denver, an E.W. Scripps Company.