WEST ALLIS, Wis. (WTMJ) — The person responsible for fatally shooting a 19-year-old in West Allis Sunday morning is still on the run.

West Allis police are asking anyone with information on this crime to come forward. It’s the first homicide this year in West Allis.

The victim is Phoenix Castanon, who was in active military training at Naval Station Great Lakes just across the state line in Illinois.

He had the weekend off, and came to Milwaukee to be with his girlfriend.

She was with him when he was shot after getting out of his car near 84th and Becher.

According to police, another woman who was with them was walking when a man in a car pulled up to her. She told investigators she felt scared, and ran to Castanon’s car to ask him for help.

He got out of his car, and approached the suspect in his car.

The two exchanged words and the suspect fired a gun at Castanon, who died at the scene.

The suspect sped off. Police do have surveillance video from two businesses nearby.

Castanon is from Arizona. His goal was to serve our country. He enlisted in the Navy last year as soon as he turned 18. He was raised in a military family. They are working to get his body back to Arizona for a funeral – another family left grieving from violence in our area.

“Please, if anybody saw or knows something, come forward for my son,” said Castanon’s mother Tiata Nez-Dunklin, who spoke with WTMJ from her home in Eagar, Arizona. “To know that he wanted to follow in my footsteps made me so proud. He grew up in a military family. His dad was in the army. He has aunts and uncles in the Marines and U.S. Air Force.” 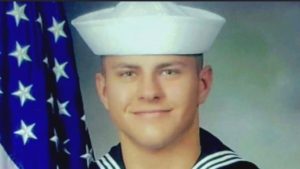 “We got a call that he was dead, and I didn’t think it was real,” said Nez-Dunklin. “I was in shock. There was no reason for him to shoot my son. To me, that is just so cowardly to use a weapon to kill a child.”

She says Castanon was known for his big heart and for always sticking up for others, especially his younger brother and sister. He was their hero.

“They’re hurting,” said Nez-Dunklin. “They’re trying their very best to stay strong, but they’re feeling just as lost as me and his dad.”

In their last phone conversation, she and Phoenix said, “I love you,” as they always did.

“He was shot on Mother’s Day,” said Nez-Dunklin. “The night before, he texted me to ask what I wanted for Mother’s Day, and told me that he loved me. That’s all I have left.”

This story was originally published May 10 by WTMJ in Milwaukee, an E.W. Scripps Company.