The urban explorer, also known as an urbexer, notified the Ohio Board of Embalmers and Funeral Directors, who in turned passed the information on to the Ohio Bureau of Criminal Investigation.

The remains were found in a building operated by an Akron man currently facing charges for providing funeral services without a license. His attorney said the remains were the property of a now-deceased Toledo funeral director.

According to the search warrant, the urbexer and another party spotted several people entering and exiting Greater Faith Missionary Baptist Church and went inside to tell them to leave. 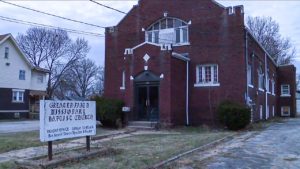 Once inside, the urbexer came across suspected cremated remains. The remains were in white cardboard boxes labeled “Tri-Coutnty Cremation Service” and plastic bags dated back to 2010.

The warrant states that an Akron resident named Shawnte Hardin operated Hussain Funeral Home and Celebration of Life out of the building as recently as Jan. 14, 2019. The sign out front refers to the building as the Greater Faith Missionary Baptist Church. Hardin’s name is on the church’s sign.

WEWS-TV has previously reported on Hardin, who is currently charged with more than three dozen counts for allegedly providing funeral services without a license.

Hardin was indicted in October 2021, according to the Ohio Attorney General’s Office. He is not a licensed funeral director or embalmer in Ohio, court documents state. Last year, Ohio BCI “removed two bodies from a building he was using for makeshift funeral services at 1615 E. Livingston Ave. in Columbus.”

In June 2020, a Lucas County grand jury indicted Hardin on a charge of abuse of a corpse. A separate search warrant previously executed at Islamic Cemetery in Columbus recovered the remains of individuals cremated in Akron and had been in Hardin’s possession. Court documents noted that the Islamic faith does not “conduct or condone cremations.”

WEWS-TV spoke with Hardin’s attorney, who said the cremated remains actually belonged to former Toledo funeral director Robert Tate, who had his license pulled in 2016.

The lawyer went on to explain that Hardin agreed to store the remains while Tate tried to reach the families. According to his online obituary, Tate died in 2021.

Yost told WEWS-TV the investigation is ongoing, however, he hopes from what people have seen so far that there’s a lesson to be taken away.

“Make sure that you are dealing with a licensed professional who is going to abide by the laws and the appropriate health regulations and secondly, reach out to somebody who’s been through it and get the advice of somebody you trust,” he added.

It’s not clear at this time what will happen to the remains of those loved ones found and when they could finally be returned to their families.

This story was originally published Jan. 13, 2022, by WEWS in Cleveland, an E.W. Scripps Company.