WASHINGTON (AP) — The U.S. is imposing financial penalties on an Iranian-based organization that raised money to target British-American author Salman Rushdie, who was violently attacked in August at a literary event.

Treasury’s Office of Foreign Assets Control sanctioned the 15 Khordad Foundation, which issued a multimillion-dollar bounty for the killing of Rushdie. He wrote “The Satanic Verses,” which some Muslims consider blasphemous. 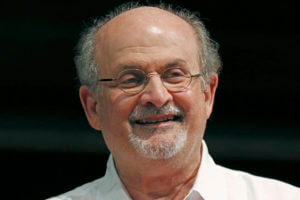 American officials say as recently as 2012, the 15 Khordad Foundation raised its bounty to $3.3 million, claiming the full sum would be given to anyone who assassinated Rushdie. Sanctions records show the organization was created in 1979.

Rushdie’s agent says the author has lost sight in one eye and the use of a hand as he recovers from an attack by a man who rushed the stage at the event in western New York.

An Associated Press reporter witnessed the attacker confront Rushdie on stage at the Chautauqua Institution and stab or punch him 10 to 15 times as he was being introduced. The author was pushed or fell to the floor, and the man was arrested.

Secretary of State Antony Blinken said the organization is also being designated for diplomatic penalties for “providing financial support for an act of terrorism.”

He said the U.S. condemns the attack on Rushdie “in the strongest terms as a blatant assault on freedom of speech and an act of terrorism.”

The sanctions and designations deny the group access to any property or financial assets held in the U.S., and the ability to travel to the U.S.

“The United States will not waver in its determination to stand up to threats posed by Iranian authorities against the universal rights of freedom of expression, freedom of religion or belief, and freedom of the press,” said Brian Nelson, Treasury’s under secretary for terrorism and financial intelligence.

“This act of violence, which has been praised by the Iranian regime, is appalling. We all hope for Salman Rushdie’s speedy recovery following the attack on his life.”

The U.S. has hit Iran’s government with a host of sanctions this year for a variety of actions related to human rights abuses.

Financial penalties were imposed on Iran’s government after the death of 22-year-old Mahsa Amini in September.

She was detained by the morality police, who said she didn’t properly cover her hair with the mandatory Islamic headscarf, known as the hijab. Amini collapsed at a police station and died three days later.

Her death has sparked months of protests across the country of 80 million people.