DALLAS (AP) — The federal government is suing SkyWest Airlines on behalf of a former employee who says co-workers sexually harassed her, including asking her for sex and making explicit comments about rape in her presence.

The U.S. Equal Employment Opportunity Commission said in a lawsuit filed Wednesday that SkyWest discriminated against the woman by subjecting her to a hostile work environment and retaliating when she complained. She eventually quit. 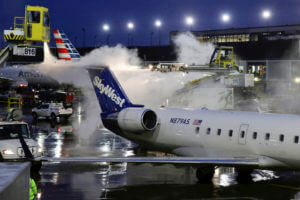 FILE – A deicing agent is applied to a SkyWest airplane before its takeoff on Jan. 18, 2019, at O’Hare International Airport in Chicago. The federal government filed a lawsuit against the airline, Wednesday, Aug. 17, 2022, on behalf of a former employee who says co-workers sexually harassed her, including asking her for sex and making explicit comments about rape in her presence. (AP Photo/Kiichiro Sato, File)

“While it is our policy to not comment on pending litigation, we have zero tolerance for discrimination or harassment of any kind and have established processes in place to follow up on any reported concerns,” the airline said in a statement.

The EEOC sued in federal district court in Dallas and asked that the woman receive back pay and punitive damages to be determined by a trial.

The agency said the woman joined Utah-based SkyWest in 2007, and the harassment started after she transferred to the airline’s parts and maintenance operation at Dallas-Fort Worth International Airport in 2019, including comments by the maintenance supervisor. She told another supervisor that she “felt singled out as … a young woman in a building full of men.”

The harassment caused the woman to take unpaid medical leave for about six weeks, and it continued when she returned. She was placed on administrative leave after filing a complaint with the airline’s human-resources department, according to the lawsuit.

Some of the woman’s co-workers corroborated her claims during an internal investigation, and an employee-relations manager recommended mandatory sexual-harassment training for all employees, the EEOC said. Five months later, in May 2020, after getting no update on the investigation, the woman resigned.

SkyWest is a regional airline that operates flights for bigger carriers including American Airlines.