U.S. women’s national team players who spent years battling for pay equity lauded as historic an agreement by U.S. Soccer to pay $24 million to settle a discrimination dispute with the team, as well as a commitment to equalize pay and bonuses to match the men’s team.

“I think we’re going to look back on this moment and just think, ‘Wow, what an incredible turning point in the history of U.S. Soccer that changed the game and changed the world, really, forever,'” star midfielder Megan Rapinoe said. 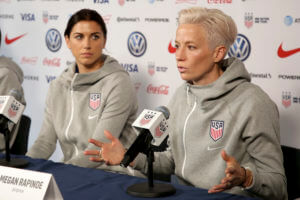 FILE – United States women’s national soccer team member Alex Morgan, left, listens as teammate Megan Rapinoe speak to reporters during a news conference in New York, Friday, May 24, 2019. U.S. women soccer players reached a landmark agreement with the sport’s American governing body to end a six-year legal battle over equal pay, a deal in which they are promised $24 million plus bonuses that match those of the men. The U.S. Soccer Federation and the women announced a deal Tuesday, Feb. 22, 2022, that will have players split $22 million, about one-third of what they had sought in damages. (AP Photo/Seth Wenig, File)

The two sides announced a deal early Tuesday that will have players split $22 million, about one-third of what they had sought in damages. U.S. Soccer also agreed to establish a fund with $2 million to benefit the players in their post-soccer careers and charitable efforts aimed at growing the sport for women.

The proposal went further, with American soccer’s governing body pledging to equalize pay — including World Cup bonuses. It effectively brings to a close the gender discrimination lawsuit players filed in 2019.

But there’s one more hurdle: Collective bargaining agreement with the players’ unions. Negotiations with the women continue following the Dec. 31 expiration of the last CBA, with a deadline set for March 31.

The settlement was a victory for the women, whose fans chanted “Equal Pay!” when they won their second straight World Cup title in France in 2019.

“I just think it’s so difficult sometimes to talk about and to articulate the kind of discrimination, abuse, inequity and disrespect that so many women feel so often in their job,” Rapinoe said. “And I think we were able to start to put a voice to that, put a face to it, put talking points to it and put a sort of movement behind it.”

The agreement was also a success for federation President Cindy Parlow Cone, a former player who became head of the federation in March 2020.

“Now we can start to work with the players in growing this game because not only are they the best players in the world, they’re the best ambassadors for our sport,” Cone said. “I’m so glad we got this done. And I’m so looking forward to just working together and turning the page.”

Cone replaced Carlos Cordeiro, who quit after the federation made a legal filing in the case that claimed women had less physical ability and responsibility than male counterparts. Cordeiro is currently seeking to regain the job from Cone when the USSF National Council meets on March 5 to vote on a four-year term.

The sides settled the working conditions portion in December 2020, dealing with issues such as charter flights, accommodations and playing surfaces. They were scheduled to argue on March 7 before the 9th U.S. Circuit Court of Appeals in an attempt to reinstate the equal pay portion thrown out by a U.S. District Court.

The players and the federation asked the appeals court on Tuesday morning to take the case off its calendar. The $22 million will be split into individual amounts proposed by the players, subject to the district court’s approval. 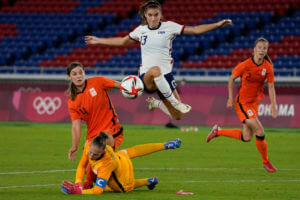 FILE – United States’ Alex Morgan jumps over Netherlands’ goalkeeper Sari van Veenendaal as she attempts to score during a women’s quarterfinal soccer match at the 2020 Summer Olympics, Friday, July 30, 2021, in Yokohama, Japan. The U.S. Equal Employment Opportunity Commission has asked for permission to participate in the appeal by American women soccer players trying to reinstate their pay claim against the U.S. Soccer Federation. The EEOC asked the 9th U.S. Circuit Court of Appeals on Thursday, Feb. 3, 2022, to be allowed to address the court during oral arguments scheduled for March 7 in Pasadena, California.(AP Photo/Kiichiro Sato, File)

“Every generation has taken on that fight to close the gap and every generation has left this program better for that fight, and we as the current players are thrilled that this fight has led to the closing of that gap,” Sauerbrunn said. “There are a lot of on-field accomplishments like World Cups and Olympics, league championships, but this will really stand out as one of the most meaningful moments.”

Cone said the federation’s method of equalizing World Cup bonuses has yet to be determined. The federation has until now based bonuses on payments from FIFA, which earmarked $400 million for the 2018 men’s tournament, including $38 million to champion France, and $30 million for the 2019 women’s tournament, including $4 million to the champion U.S.

“Until FIFA equalizes it themselves, we need both the men’s PA and the women’s PA to come together with US Soccer to find a solution to equalize it,” Cone said.
The men have been playing under the terms of a CBA that expired in December 2018. The women’s union was at the bargaining table on Tuesday afternoon.

The U.S. women have won four World Cups since the program’s start in 1985, while the men haven’t reached a semifinal since 1930.

“It’s really been incredible to stand alongside all these women on the national team and feel like we are making a difference, not only for ourselves, but for the next generation, for the women we stand alongside across sport and workforces,” Morgan said. “I feel like it’s just been exponentially bigger than I could have ever anticipated, in a good way.”