BOUNTIFUL, Utah (KSTU) — Police say they arrested a man who stabbed a woman multiple times at a park in Utah on Thursday evening, fled the scene, and then stabbed another woman before being captured.

According to a probable cause affidavit, 18-year-old Kane Thomas Fairbank and the first woman became acquainted through Tinder, then met Thursday at Mueller Park in Bountiful, where they were together for several hours until he coerced her into his vehicle around 6:30 p.m. At that point, he allegedly stabbed her several times with a knife. She had significant wounds to her hands, neck, and face. 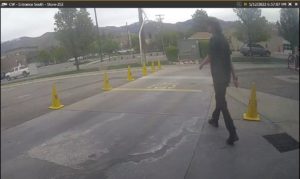 Despite her wounds, the 18-year-old victim was able to successfully fight Fairbank off and run away, police said. Fairbank then allegedly proceeded to chase her and stab her in the back while she was running.

Police said this stab in the back was life-threatening, but the victim managed to keep running until they reached a group of people in the park.

“Those witnesses took action and helped create a barrier between Fairbank and the victim,” the Davis County Sheriff’s Office wrote in a press release.

At that point, the suspect ran away. In the meantime, two nurses and a paramedic who were witnesses provided first aid while another witness called 911.

According to the affidavit, Fairbank then drove to a different location in Bountiful and dumped the victim’s phone and his phone where he thought they wouldn’t be found. He also abandoned his car at a gas station.

Fairbank then walked to a neighborhood near 550 North and 500 West. There, police said he saw a 64-year-old woman who he did not know, approached her, and stabbed her multiple times. Court documents state that in an interview with police, he “admitted that he targeted Victim 2 because she was elderly, alone, and vulnerable.”

She fell to the ground and began to fight him. Fairbank then ran away to a different area, and a second group of witnesses aided the victim until first responders arrived.

Police said a “Good Samaritan” spotted Fairbank and detained him until officers arrived.

The knife was later recovered by detectives and was described as being a fixed blade, nearly a foot in length.

Both victims were taken to area hospitals in critical condition. As of Friday afternoon, their conditions were stable.

Police said after being read his rights, Fairbank admitted to planning the first victim’s murder. He allegedly told officers he invited the first victim to the park “with the intent of luring her into his car and killing her” after they met on Tinder.

Fairbank allegedly told officers after he saw the second victim he intended to kill her as well. He said the only reason he stopped stabbing the second victim was that people nearby were running to her aid, according to the arrest report. He also allegedly said he had “planned for other assaults.”

Fairbank was booked into jail and is being held without bail. He faces two charges of attempted murder, one count of aggravated kidnapping, and two counts of obstructing justice.

Both victims remained hospitalized as of Friday afternoon.

The sheriff’s office released the photo of Fairbank below from a surveillance camera and asked that anyone who lives or works in the areas of the attacks to check their cameras as well for any shots of Fairbank between 6:30 p.m. and 8:30 p.m. Thursday evening. Anyone with videos, photos or other information is asked to call Davis County non-emergency dispatch at 801-451-4150.

This story was originally published May 13 by KSTU in Salt Lake City, an E.W. Scripps Company.