NEW ORLEANS (AP) — A federal judge in Texas overstepped his authority when he blocked President Joe Biden’s requirement that all federal employees get vaccinated against COVID-19, an attorney for the administration told a federal appeals court panel Tuesday.

Department of Justice lawyer Charles Scarborough noted that district judges in a dozen jurisdictions had rejected a challenge to the vaccine requirement for federal workers. U.S. District Judge Jeffrey Brown, who was appointed to the District Court for the Southern District of Texas by President Donald Trump, issued a nationwide injunction against the requirement in January. 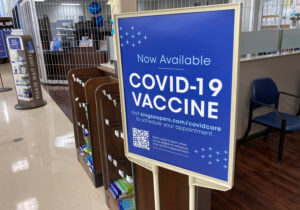 In this Saturday, Oct. 23, 2021, photograph, a sign notifies customers that COVID-19 vaccinations are available at a pharmacy in a grocery store in Monument, Colo. (AP Photo/David Zalubowski)

He also argued that the case does not belong in federal court because federal employees have administrative civil service remedies they must exhaust first before heading to court.

Arguing for those challenging the mandate, lawyer Trent McCotter said it was the administration that was exceeding its statutory and constitutional power. McCotter referenced the recent Supreme Court opinion that the government cannot force private employers to require employee vaccinations. He said the federal employee mandate was the same kind of “coercive choice” struck down in that case. “It’s a sort of freestanding, ongoing constitutional injury,” McCotter said.

It was the second time in a month that the 5th Circuit dealt with the issue. A different panel refused last month to block Brown’s ruling pending appeal. That panel’s vote was 2-1, with no reasons given by the majority but a lengthy dissent by Judge Stephen Higginson, who said a single district judge “lacking public health expertise and made unaccountable through life tenure,” should not be able to block the president from ordering the same type of COVID-19 safety measures many private sector CEO’s have ordered.

In Tuesday’s hearing, Judge Carl Stewart questioned whether Brown was right to order that his ruling apply nationwide. McCotter defended the scope of the ruling. “Unless he makes this a broad, clear injunction, then individuals entitled to relief are going to fall through the cracks.”

Tuesday’s panel members gave no indication when they would rule. The panel consisted of Stewart, an appointee of President Bill Clinton; Rhesa Barksdale, appointed by President George H.W. Bush; and Judge James Dennis, another Clinton appointee.

The federal employee vaccination requirement is one of multiple related vaccine mandates being tested in federal courts. Biden’s order that private employers force workers to get vaccinated was struck down by the Supreme Court. But on the same day, the high court removed lower court blocks on enforcement of a mandate that a wide array of health care providers funded through Medicate or Medicaid require that their employees be vaccinated.

A requirement that federal contractors and subcontractors require employee vaccinations is on hold. A federal judge in Georgia blocked that mandate nationwide and the Atlanta-based 11th Circuit appeals court is to hear arguments in that case April 8.