PLATTEVILLE, Colo. (KMGH) — Newly released video shows the arrest of a woman on Sept. 16 who was then put into a Platteville Police Department cruiser that was hit by a train a short time later.

The Fort Lupton Police Department released an edited eight-minute video of several officers’ and deputies’ body cameras who responded to the initial call and after the woman was hit by a train while handcuffed inside the police cruiser.

On the evening of Sept. 16, a Platteville officer located a suspect vehicle on US Highway 85 and County Road 36. Police said the pickup truck and driver were reportedly involved in a road rage incident involving a firearm in Fort Lupton earlier that night.

The video starts with two Platteville police officers following Yareni Rios-Gonzalez, 20, of Greeley, with their lights on, then turning off of U.S. Highway 85 onto Weld County Road 36.

Rios-Gonzalez, who is driving a pickup truck, pulls over on the other side of the train tracks that are just a few dozen feet down CR 36 from U.S. 85. One officer, a man referred to as “Vasquez,” stops his cruiser directly on the train tracks and the female officer who was driving behind him stops hers behind his cruiser. The body camera video says it is 7:49 p.m.

The female officer goes to the passenger side of Vasquez’s cruiser with her gun drawn and pointed at the pickup truck. The other officer gets on a loudspeaker and tells Rios-Gonzalez he wants to see her hands. They tell her to put her phone down and put both hands out of the window.

Rios-Gonzalez asks, “What’s going on? Why am I being arrested?” and asks where she is going. The officer tells her she is going to the car. Rios-Gonzalez tells the officers there are no weapons in the car and keeps asking what’s going on. She is put into the police cruiser that is directly over the tracks. The body camera video says it is 7:52:44 p.m.

The video then cuts to another officer or deputy who is armed with a rifle and clearing the pickup truck. Officers with the Fort Lupton Police Department assisted with the arrest. The officer or deputy tells dispatch the vehicle is clear.

As officers are looking through the vehicle, they find a holster, and one officer says multiple times that it took Rios-Gonzalez a very long time to pull over as they speculate whether Rios-Gonzalez tossed a weapon out of the truck.

At 7:53:53 p.m., officers start to hear a train horn in the background, and the female officer turns around to see train lights, yells an expletive, then the Union Pacific train hits the cruiser, as seen in the video. The video shows it is 7:54:12.

The video shows multiple other angles of the train hitting the vehicle. One of the cuts then shows an officer telling dispatch the cruiser the woman was in was hit by a train and calls for paramedics.

The video cuts again to another officer’s body camera who is running toward the cruiser, which sustained severe damage to its passenger side. The video shows the curtain airbags deployed in the vehicle. There is debris scattered across the area. 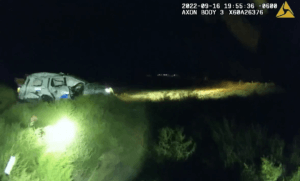 The video cuts to another body camera that shows Weld County sheriff’s deputies continuing to search Rios-Gonzalez’s vehicle. They find a round in a door as they are looking for the woman’s identification, then one of the deputies says they found a gun in the truck’s center console.

The video ends there.

Rios-Gonzalez was transported to a Greeley hospital with serious injuries, but authorities said Monday that she was expected to survive.

According to Paul Wilkinson, her personal injury attorney, Rios-Gonzalez had surgery on a broken arm, suffered nine broken ribs, a fractured sternum, broken teeth, and injuries to her leg, back and head.

Wilkinson said she tried to escape from the vehicle, but it was locked. She also saw the train from a good distance off, he said, and was yelling at the officers and trying to get their attention before the train hit the car.

“The most alarming thing for me is that you can hear the train coming – and it’s at nighttime, and the train has lights also,” Wilkinson said. So, you can both hear and see the train coming.”

He said he believes multiple laws were potentially broken and that he is looking into legal possibilities after the crash in state and federal courts.

Wilkinson said Rios-Gonzalez is awake as of Friday and able to have a conversation but is still in pain because of all of her injuries.

A Federal Railroad Administration accident report says the train had six locomotive cars, 70 cars, and was traveling at 50 miles per hour at the time of the crash. Two people were aboard the train, and the driver was not injured.

On Monday, the Platteville Police Department confirmed that the officer involved in the incident was placed on paid administrative leave.

The Fort Lupton Police Department is investigating the alleged road rage incident. Colorado State Patrol is reviewing the crash, and the Colorado Bureau of Investigation is investigating how Rios-Gonzalez was injured while in police custody.

This story was originally published Sept. 23 by KMGH in Denver, an E.W. Scripps Company.