VIRGINIA BEACH, Va. (WTKR) – A father-son pair were sentenced for their roles in a 2020 murder over the theft of half an ounce of marijuana.

Court documents say that on the morning of January 5, 2020, 22-year-old Mickey Koji Saiheir Walker met an acquaintance, Davion Bush, at the end of his street to sell him a half-ounce of marijuana. 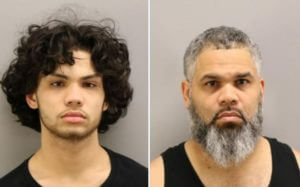 According to court documents, Bush grabbed the marijuana and drove away without paying for it. Walker attempted to follow Bush’s vehicle on foot, then called his father, 45-year-old Mickey Walker II, to come pick him up.

The father and son searched multiple apartment complexes before locating Bush in a parking spot in an apartment complex on Baker Road. Walker II blocked Bush’s vehicle in with his truck, and both men exited the vehicle and approached Bush.

Bush tried to back out of the parking spot, but collided with the Walkers’ truck. Walker struck and kicked Bush’s driver door and window, then Walker II pulled out a gun and shot Bush twice. The two men then drove away together, leaving Bush with fatal gunshot wounds to his left cheek and left side of his neck.

After a witness identified Walker II in a photo lineup and provided a partial license plate to police, officers searched the victim’s cell phone and found messages between Walker and Bush describing plans to meat up that morning for a marijuana deal. Police also found a 9mm pistol while searching the Walkers’ residence; that pistol was later determined to be the gun that Walker II used to shoot Bush.

This story was originally published May 2, 2022 by WTKR in Norfolk, an E.W. Scripps Company.