NEWPORT NEWS, Va. (WTKR) – A Newport News, Virginia police officer has been arrested for the sexual exploitation of children.

The police department announced that on Thursday afternoon, it was informed of the FBI’s ongoing investigation involving one of its officers. Friday morning, federal agents took Sgt. Michael Covey, 39, into custody at Newport News Police Headquarters.

He was taken to Norfolk, Virginia to appear before a federal magistrate.

WTKR obtained the federal affidavit and criminal complaint related to this case. According to the affidavit, Covey was formally charged with one count of Sexual Exploitation of Children. 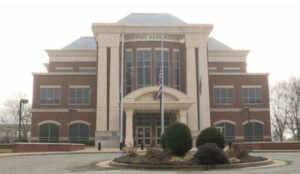 Court documents say in February, the Hocking County Sheriff’s Office in Ohio received a tip from the National Center for Missing and Exploited Children (NCMEC). The social media platform Kik filed a complaint with the NCMEC notifying them of seven pornographic images of young girls. The images were traced back to a specific screen name, and the following day, the sheriff’s office met with the man who supposedly owned the screen name.

After confirming his Kik screen name and email address, the man “made a couple of admissions” and was arrested. The sheriff’s office and agents with FBI Cincinnati then examined electronic evidence such as images and videos that were seized from his vehicle.

On June 1, the NCMEC identified two images and three videos of “apparent child exploitation” of a young girl. Through image analysis, the affidavit says the NCMEC found possible investigative clues that would have identified the child or the person who produced the images and videos.

The NCMEC determined that the files may have been taken in Newport News and forwarded them to the Southern Virginia Internet Crimes Against Children Task Force in Bedford County.

Days later, on June 7, the task force contacted FBI Norfolk for help with identifying the girl in the images and videos. According to the affidavit, the data from the video files traced the source of the images and videos, which are alleged to have come from Covey. The data even revealed that an iPhone was used to take the videos.

Based on the data, officials believed the videos were taken between December 2021 and January 2022.

The criminal complaint states that enough information exists to make Covey’s arrest based on probable cause while the FBI investigation continues.

News 3 spoke to Newport News Police Chief Steve Drew Friday afternoon and asked him about Covey’s arrest. Here’s what he had to say:

“It is very, very unfortunate. My heart goes out to all those involved. And that’s hard, but I think we have to remember that we all are held accountable, and now this situation’s going to be in the courts system, and we have to let it take its course.

And I don’t want to speak out of turn or anything there, but those things are challenging. But I think it’s important that we moved quickly, addressed the situation that we had – whichever way things go – but I think it’s also important to be open and transparent.

I wanted this department, Commonwealth’s attorney and media to hear it from me; I didn’t want to wait until rumors fly out there and people say this or that – I wanted to be open and transparent.

I think that’s one of the things that builds tremendous trust we have with this community and our relationship, but I was very, very saddened to hear about the charges. But then we had to do what we do, and we’re gonna be professional and go forward, and that’s what happened today.”

Covey has been with the department for about 16 years and was most recently assigned to the Special Operations K-9 Division.

He was placed on administrative leave with pay, pending the outcome of the federal investigation.

This story was originally published June 10, 2022 by WTKR in Norfolk, an E.W. Scripps Company.