ELIZABETH CITY, N.C. (AP) — A search warrant being served when deputies shot and killed a Black man in North Carolina says that investigators used information from an informant, including recordings of drug buys, according to court documents released Monday. 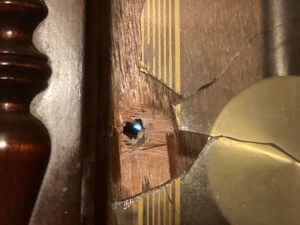 Daylight shines through a bullet hole in an antique clock on the living room wall of Michael Gordon’s home in Elizabeth City, N.C., on Wednesday, April 21, 2021. Officers trying to serve a warrant on Andrew Brown Jr. fired at him as he was fleeing, striking Gordon’s home. (AP Photo/Allen G. Breed)

The search warrant has been cited as the reason that deputies came to Andrew Brown Jr.’s house last Wednesday. Pasquotank County Sheriff Tommy Wooten II has said that deputies shot and killed Brown while serving drug-related search and arrest warrants but released few other details. An eyewitness account and emergency scanner traffic indicates that Brown was driving away and may have been shot in the back.

The search warrant released Monday offers new details. The warrant obtained by the Pasquotank County sheriff’s office and signed by a local judge said that an investigator in nearby Dare County was told by the informant that the person had been purchasing crack cocaine and other drugs for over a year from Brown. The warrant said that in March, local narcotics officers used the informant to conduct controlled purchases of methamphetamine and cocaine on two separate occasions. The warrant says both buys were recorded.

Previously disclosed arrest warrants from Dare County included charges of possession with intent to sell and deliver cocaine and methamphetamine against Brown.

His shooting death has prompted days of protests, with demonstrators calling for transparency. Seven deputies are on leave over the shooting, and the State Bureau of Investigation is probing it.